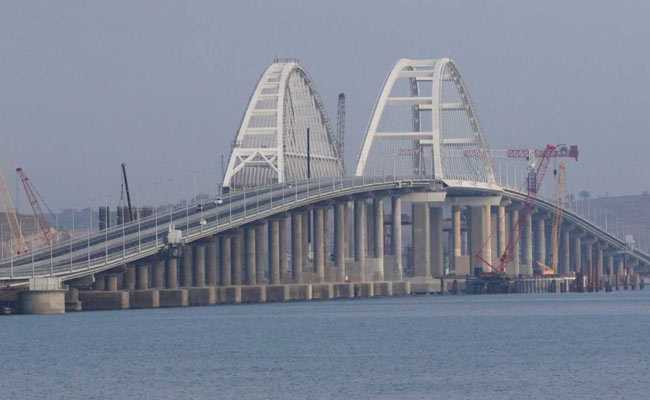 The EU on Tuesday expanded its sanctions against Moscow to include companies that helped build a bridge from mainland Russia to Kremlin-annexed Crimea, which it says violates Ukraine's sovereignty.

The European Union said the six firms and organisations will have their assets in the EU frozen for their role in building the Kerch Bridge, which Russian President Vladimir Putin inaugurated in May.

"EU adds six entities involved in the construction of the Kerch Bridge connecting the illegally annexed Crimea to Russia to sanctions list," EU member states headlined in a statement.

"Through their actions they supported the consolidation of Russia's control over the illegally annexed Crimean peninsula," they added.

This, it said, "in turn further undermines the territorial integrity, sovereignty and independence of Ukraine."

The Ukrainian President Petro Poroshenko in a Facebook post welcomed the EU move to sanction those "involved in the construction of the illegal Kerch Bridge".

Moscow meanwhile denounced a "subversive policy directed against the residents of Crimea".

The West "encourages those who are involved in the energy blockade of Crimea and persecutes those who are building civil infrastructure," foreign ministry spokeswoman Maria Zakharova said in comments reported by Russian news agencies.

Two of the six firms and organisations identified in the EU's Official Journal are controlled by businessman Arkady Rotenberg, a close Putin ally.

The EU has also unleashed a series of sanctions against Moscow for its support for pro-Russian separatists in the conflict in eastern Ukraine.

A total of 44 entities have now been hit with EU sanctions against Russia.

Another 155 people, including several close to Putin, have also seen asset freezes and travel bans as a result of the EU blacklist.

The EU says it continues to refuse to recognise the 2014 annexation of Crimea by Russia, which was condemned by the pro-western government in Kiev as well as the United States and the EU, who see it as an illegal land grab.

The peninsula had been hard to reach from southern Russia with long queues of vehicles often forming to board ferries, which cannot always run in winter storms, so the easiest way across is to fly.