Surrounded by supporters, Alexei Navalny chanted "Swindlers and thieves" before being detained by police shortly afterwards at an unsanctioned gathering in the city centre amid heavy police presence. 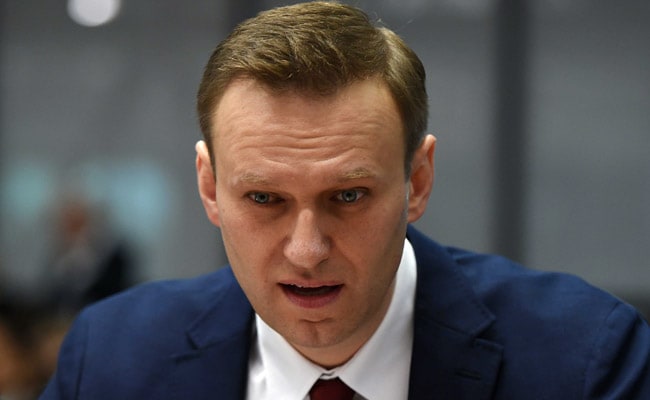 Moscow: Russian police on Sunday detained opposition leader Alexei Navalny at a rally in Moscow which he had called to protest upcoming polls expected to extend Vladimir Putin's Kremlin term to 2024.

Surrounded by supporters, the 41-year-old chanted "Swindlers and thieves" before being detained by police shortly afterwards at an unsanctioned gathering in the city centre amid heavy police presence.

"I have been detained," Navalny tweeted. "This means nothing. Come to Tverskaya (Avenue)," he said, referring to Moscow's main thoroughfare.

"You are not rallying for me, but for yourselves and your future."

Several thousand turned up for the rally in Moscow where authorities dramatically beefed up security, dispatching police vans and passenger buses to the city centre.

Around 90 people were detained across the country, according to OVD-Info, an independent group which monitors crackdowns on demonstrations.

"These are not elections because we already know the result. I will not go and vote," Elena Ruzhe, 62, told AFP in central Moscow.

Protester Alexandra Fedorova, who wore a fur coat, said it was wrong not to let Navalny take part in the vote.

'Tired of this quagmire'

Protesters expressed similar sentiments in the second city of Saint Petersburg, the Russian leader's hometown, where at least 1,000 people rallied, some chanting "Russia without Putin" and "Putin is a thief."

"I want change," Andrei Petrov, 20, told AFP in the former imperial capital. "We are tired of living in this quagmire."

Earlier in the day opposition supporters protested in far eastern Russia and Siberia, including in the northern city of Yakutsk where Russians rallied despite temperatures of around minus 45 Celsius (minus 49 Fahrenheit). 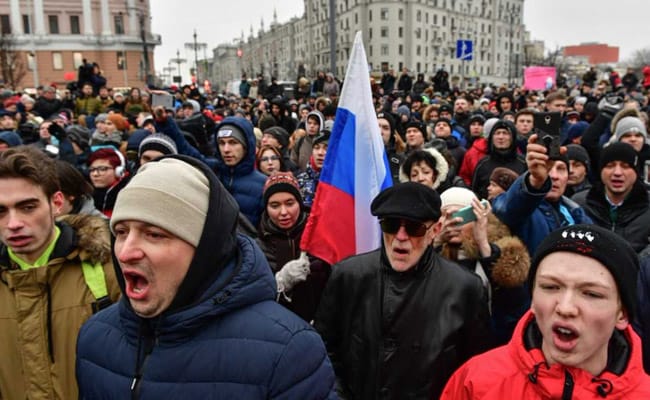 Navalny -- seen as the only politician with enough stamina to take on Putin -- has built a robust protest movement despite constant police harassment, tapping into the anger of a younger generation yearning for change.

He says the upcoming election will be little more than a coronation of Putin who is expected to win a fourth presidential term and extend his Kremlin stay until 2024.

Ahead of the main Moscow rally police broke into Navalny's headquarters using a power saw, interrupting a live broadcast covering the protests in the east of the country.

"If you don't go, you won't forgive yourself later," Navalny's said in a video address before the start of the protest.

"Sooner or later they will cut your door too."

Ahead of his detention Navalny said police officers had been watching his residential building and garage. "Police, police, police are everywhere," he added.

Last year Navalny mounted a forceful bid to run for president but officials ruled him ineligible due to a criminal conviction which he says is politically motivated.

Navalny has said he would use the full force of his campaign -- including over 200,000 volunteers -- to organise "voters' strikes" and encourage Russians to stay away from polling stations on election day.

After 18 years of leadership, both as president and prime minister, Putin fatigue is spreading across Russia.

The Kremlin's biggest headache is the possibility of a low turnout which will harm Putin's hopes for a strong new mandate, analysts say.

Navalny seeks to take the shine off Putin's expected victory and highlight voter apathy in his crusade against the 65-year-old leader.

"Turnout at these elections is extremely important for Putin," Lev Gudkov, head of the Levada Centre, an independent polling group, told AFP.

Promoted
Listen to the latest songs, only on JioSaavn.com
"He needs to create the impression of not just a convincing victory but unanimous nationwide support, a plebiscite."

Putin won the previous election in 2012 on a turnout of 65 percent and authorities are pulling out all the stops to boost the figures this year.