Russia has appeared to be on the fringes of a flurry of diplomacy as Pyongyang and Washington continue to deliberate over the Singapore summit. 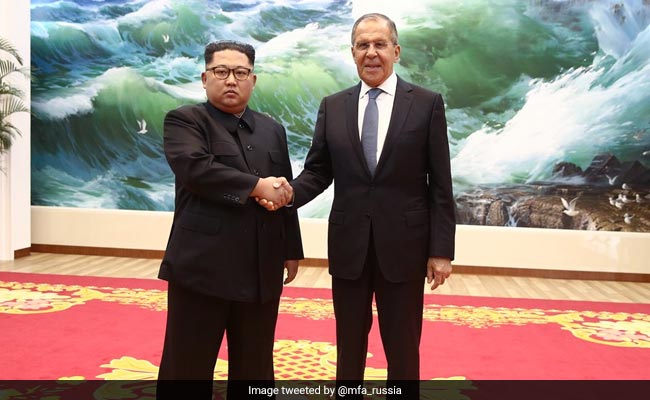 Sergei Lavrov's meeting with Kim Jong-Un was likely a move to secure Russia as a key negotiator.

Lavrov visited the secretive state for the first time since 2009, as North Korean and U.S. officials met for a second day to prepare the ground for an historic summit on June 12 between U.S. President Donald Trump and the North Korean leader.

Russia has appeared to be on the fringes of a flurry of diplomacy as Pyongyang and Washington edge towards talks aimed at ending years of tension over North Korea's nuclear programme.

Lavrov on Thursday invited Kim him to visit Moscow.

"Come to Russia. We would be very happy to see you," Lavrov, seated across a table from Kim, said during a televised meeting.

He expressed Moscow's support for a declaration last month in which North and South Korea agreed to work for the denuclearisation of the peninsula.

He said Moscow hoped all sides would take a measured approach to possible forthcoming talks on a nuclear settlement.

"This will allow for the realisation not only of the denuclearisation of the whole Korean peninsula but also to provide sustainable peace and stability across north-east Asia," Lavrov was quoted as saying by his ministry.

Kim's personal meeting with Lavrov was likely a move to try to secure Russia - along with China - as another powerful player that can push the United States to ease sanctions and make other concessions, said Anthony Rinna, a specialist in Korea-Russia relations at Sino-NK, a website that analyzes the region.

In the short term, Moscow "cannot afford to be remembered as the country that had no hat in the ring leading up to June 12," he said.

"From a longer-term perspective, Russia hopes to foster economic cooperation with both North and South Korea."

Kim would be wise to delay any official visit to Russia until after his meeting with Trump, said Jeong Hyung-gon, a research fellow at the Korea Institute for International Economic Policy.

"It won't be easy for Kim Jong Un to turn down an official invitation, so I think it would be after the June 12 summit, which would help him to hold a successful summit with the U.S."