The cosmonaut's comments came after Putin touted Russia's coronavirus vaccine developed in record time and named "Sputnik V" after the Soviet-era satellite that was the first launched into space in 1957. 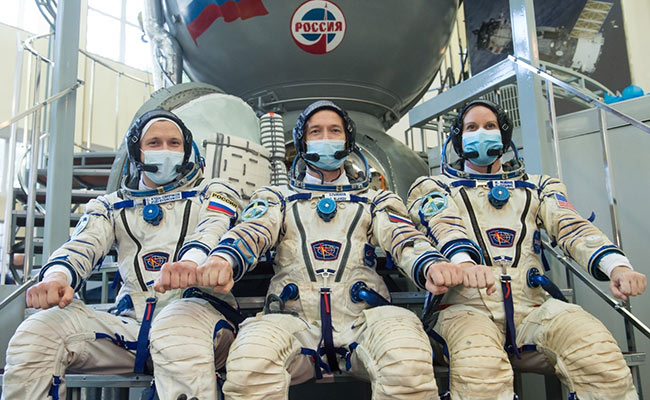 Russian cosmonauts set to blast off for the International Space Station.

Russian cosmonauts set to blast off for the International Space Station said on Thursday it was too early to get a coronavirus vaccine touted by President Vladimir Putin.

"I'd personally say that I would not get vaccinated because I tread very carefully on this issue," said Sergei Ryzhikov, the 46-year-old leader of the next expedition to the ISS in October.

He and other cosmonauts wore face masks at the Star City training centre outside Moscow during an online news conference.

The cosmonaut's comments came after Putin touted Russia's coronavirus vaccine developed in record time and named "Sputnik V" after the Soviet-era satellite that was the first launched into space in 1957.

"As soon as the vaccine is tried and tested and proves its reliability then a decision will be taken to recommend that cosmonauts get vaccinated," said fellow cosmonaut, 37-year-old Sergei Kud-Sverchkov.

He said the decision was down to the doctors in charge of cosmonauts' healthcare including immunisation.

Russia has raised concerns among Western scientists by announcing that its vaccine had received approval before full clinical trials have been completed.

While the vaccine showed promising results in early trials, Russia has not yet completed the final phase of clinical testing, in which large numbers of people receive either the vaccine or a placebo.

Nevertheless, Russia has already vaccinated high-profile officials including Defence Minister Sergei Shoigu and Moscow Mayor Sergei Sobyanin. Putin has said that one of his daughters was vaccinated, suffering only a mild reaction.

Astronauts routinely undergo a quarantine period before blasting off to space.

"We don't have to be vaccinated because we strictly follow all sanitary rules."