Russia-Ukraine war: Russia made the announcement after its army accused Kyiv earlier Saturday of a "massive" drone attack on its Black Sea fleet. 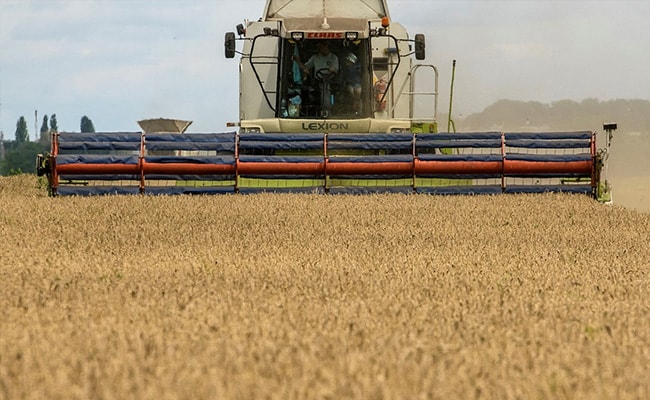 The Turkey and UN-brokered deal to unlock grain exports between Russia and Ukraine. (Representational)

Russia on Saturday suspended its participation in a landmark agreement that allowed vital grain exports from Ukraine, blaming drone attacks on Russian ships in Crimea.

Russia made the announcement after its army accused Kyiv earlier Saturday of a "massive" drone attack on its Black Sea fleet, which Ukraine labelled a "false pretext" and the UN urged the deal's preservation.

The Turkey and UN-brokered deal to unlock grain exports signed between Russia and Ukraine in July is critical to easing the global food crisis caused by the conflict.

The agreement already allowed more than nine million tonnes of Ukrainian grain to be exported and was due to be renewed on November 19.

A Turkish security source told AFP that Ankara had not been "officially notified" of Russia's suspension, while Ukraine and the UN pushed for the agreement to remain in force.

"I call on all states to demand that Russia stop its hunger games and recommit to fulfilling its obligations," Ukrainian Foreign Minister Dmytro Kuleba said on Twitter.

Stephane Dujarric, spokesman for the UN secretary-general, said: "It is vital that all parties refrain from any action that would imperil the Black Sea Grain Initiative which is a critical humanitarian effort."

Sevastopol in Moscow-annexed Crimea has been targeted several times in recent months and serves as the headquarters for the Black Sea fleet and a logistical hub for operations in Ukraine.

The Russian army claimed to have "destroyed" nine aerial drones and seven maritime ones, in an attack in the port early Saturday.

"In light of the terrorist act carried out by the Kyiv regime with the participation of British experts against ships of the Black Sea fleet and civilian vessels involved in the security of grain corridors, Russia suspends its participation in the implementation of the agreement on the export of agricultural products from Ukrainian ports," the Russian defence ministry said on Telegram.

Moscow's forces alleged British "specialists", whom they said were based in the southern Ukrainian city of Ochakiv, had helped prepare and train Kyiv to carry out the strike.

In a further singling out of the UK -- which Moscow sees as one of the most unfriendly Western countries -- Russia said the same British unit was involved in explosions on the Nord Stream gas pipelines last month.

Britain strongly rebutted both claims, saying "the Russian Ministry of Defence is resorting to peddling false claims of an epic scale."

The British defence ministry said this "invented story says more about arguments going on inside the Russian Government than it does about the West".

Moscow's military said ships targeted at their Crimean base were involved in the grain deal.

Russia had recently criticised the deal, saying its own grain exports have suffered due to Western sanctions.

Mikhail Razvozhayev, the Moscow-installed governor of Sevastopol, said Saturday's drone attack was the "most massive" the peninsula had seen.

The city's services were on "alert", but he claimed no "civilian infrastructure" had been damaged.

City authorities said the harbour was "temporarily" closed to boats and ferries and urged people "not to panic".

Attacks on Crimea, annexed by Moscow in 2014, have increased in recent weeks, as Kyiv presses a counter-offensive in the south to retake territory held by Moscow for months.

Moscow-installed authorities in Kherson, just north of Crimea, have vowed to turn the city into a fortress, preparing for an inevitable assault.

On Thursday, Razvozhayev said a thermal power station had been attacked in Balaklava, in the Sevastopol area.

He claimed there was only minor damage and no casualties.

In early October, Moscow's bridge linking Crimea to the Russian mainland -- personally inaugurated by President Vladimir Putin in 2018 -- was damaged by a blast that Putin blamed on Ukraine.

The Russian fleet stationed in the port had also been attacked by a drone in August.

Russia's allegations Saturday came as the Ukrainian army reported fighting in the Lugansk and Donetsk regions in the east, including near Bakhmut -- the only area where Moscow's forces have advanced in recent weeks.

Pro-Russian separatists fighting alongside Moscow also announced a new prisoner exchange with Kyiv, saying 50 will return home from each side.

Both sides were gearing up for the battle for the city of Kherson, the regional capital that fell to Moscow's forces in the first days of their offensive.