Russia-Ukraine war: The contraption -- a heavy machine gun welded to steel tubes -- is one of several do-it-yourself weapons that are proving to be valuable additions to the Ukraine war effort. 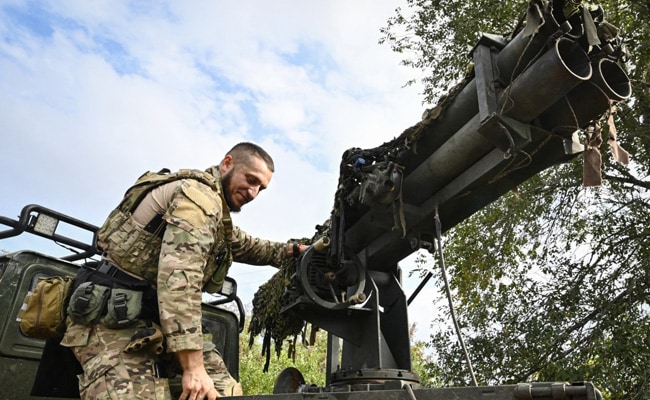 The contraption, a heavy machine gun welded to steel tubes, is one of several DIY weapons

In a metal workshop in the industrial city of Kryvyi Rih in southern Ukraine, a homemade anti-drone system waits to be mounted on a military pick-up truck.

The contraption -- a heavy machine gun welded to steel tubes -- is one of several do-it-yourself weapons that are proving to be valuable additions to the Ukraine war effort.

"We have the skills and the equipment, and we don't lack ideas," said Sergey Bondarenko in the workshop near the southern front.

The well-built 39-year-old with a long black beard is a local leader of the territorial defence, a unit of the Ukrainian army.

The device will be accompanied by shock absorbers, for more stability and precision, Bondarenko told AFP beside the anti-drone prototype.

Nothing similar previously existed in Ukraine's arsenal which largely dated back to Soviet times when drones were unheard of, explained the former engineer.

"Problems have happened to us that we weren't expecting," he said, adding that he has been fighting against Russians since 2014.

For several weeks, Iranian kamikaze drones used by Russia have been attacking southern cities like Kryvyi Rih, terrorising the population.

"The brigade commander told me: We need a solution. There are machine guns. That's all," Bondarenko said with a smile.

The heavy machine gun can hit targets at a distance of 6,000 metres (19,685 feet), much higher than the altitude at which drones fly.

It could even be a substitute for anti-drone rifles, wave jammers and other costly air defence systems that his unit lacks.

In a field outside the city, Yevgeny, code name "Badger", drives a 30-year-old all-terrain Mercedes truck, on which a homemade multiple rocket launcher system has been placed.

The four tubes of this weapon come from a Russian "Grad" missile destroyed by the Ukrainian army.

A beam serves as a turret, while the rockets are Czech or Italian, depending on the deliveries.

"We make do with what we have," said Badger, a two-metre-tall colossus who helped to make it.

"If we don't rely (first) on ourselves, no one will help us," he said.

Since Russia invaded on February 24, many Ukrainian civilians have rallied behind their "defenders".

Individuals have given cars and wages, while companies have donated profits and trucks, which have reappeared in camouflage livery, sometimes militarised.

The "Ukrainian DIY vehicles" do not have "a decisive impact" on the conflict, but they make it possible to somehow "harass the Russians", which is important, said Pierre Grasser, a Paris-based analyst.

They "attract sympathy, and illustrate the mobilisation of an entire country", said Grasser, a Russian defence expert.

Vitaly Brizgalov meanwhile has tasked himself with making all-terrain military buggies for the army.

In his small garage, the atmosphere recalls all-action 1980s hit TV series like "The A-Team" and "MacGyver" as a dozen workers vigorously cut, screw and grind metal tubes and parts.

The vehicles, whose antique Lada engines are an advantage due to their light weight, cost just 2,000 euros ($1,973), around ten times less than a brand-new civilian buggy.

So far 30 buggies have been produced for combat, with a dozen more in production, ready to be upgraded with the addition of different weapons.

A photo on Brizgalov's phone shows one of his customisable buggies with a Javelin missile system welded onto it by soldiers.

"I do anything to help us win faster... Even if people have to die" on the Russian side, said this visibly reserved and frail man.

"Since the beginning of the war, I have become much tougher," he said.