Russia Is Escalating Tensions Ahead Of The US Elections, Officials Say 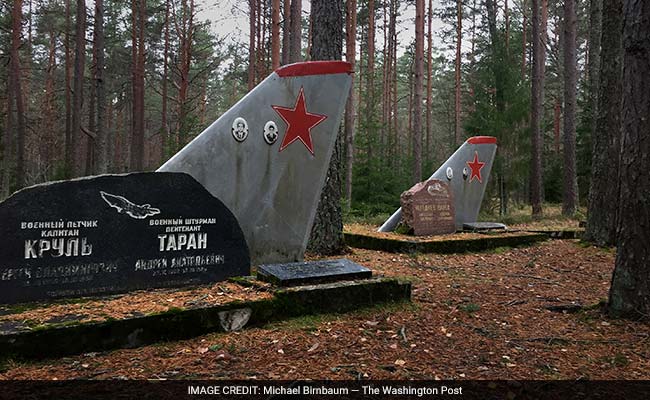 Soviet-era plane tails serve as grave markers just outside the entrance to Estonia's Amari Air Base.

Amari Air Base, Estonia: On a recent night at this air base where NATO fighter pilots keep a constant vigil against the Kremlin, the alarms that warn that Russian planes were veering toward NATO airspace wouldn't stop going off.

At least 13 Russian warplanes coursed through the skies. And the NATO fighter jets kept rushing into the air to meet them. By the end of the night, Finland and Estonia said their airspace had been violated - and in the sea below, a powerful nuclear-capable missile system was on its way to a Russian naval base in the enclave of Kaliningrad.

Just ahead of the U.S. presidential elections, Russian President Vladimir Putin appears to be pushing his conflict with the West to new heights. He has declared an end to a plutonium-disposal agreement with the United States. Two weeks ago, he stationed new cruise missiles in Kaliningrad, further bolstering a territory that already was bristling with weaponry. And Aleppo is bracing for a renewed Russian bombardment that may begin as soon as this weekend. Many Western policymakers say he may be taking advantage of end-of-term distractions in the White House to exert as commanding a position as possible before a new president takes office Jan. 20.

For the seven German fighter pilots who trade 24-hour shifts at this remote air base, the escalation has a practical effect: more close encounters with Russian fighter pilots high in the skies. The pilots often fly within 10 yards of the Russian jets, close enough to wave hello, or in one recent incident, see a Russian pilot brush them off with a middle finger.

"Maybe he watched too much 'Top Gun,' " said Lt. Col. Swen Jacob, the commander of the German contingent that is posted for a four-month rotation to a round-the-clock air-policing mission in Estonia.

The Germans have scrambled 34 times since they arrived for their latest posting in Estonia on the last day of August, rushing up into the air to escort Sukhoi fighter jets, Ilyushin reconnaissance planes and Antonov transport planes. The vast majority of the traffic comes from runs in international airspace between Russian air bases near St. Petersburg and Kaliningrad, the Russian enclave wedged between Lithuania and Poland. Russian military flights often fly without transponders, making them invisible to civilian aircraft and raising the risk of midair crashes.

"The fighter aircraft are almost always armed to the teeth," Jacob said. "Six kinds of missiles. They could carry up to 10."

As the United States prepares to vote, the Kremlin may be preparing in a different way, knowing that President Barack Obama is unlikely to match Russia's escalation so shortly before handing power to his successor, defense officials say. Recent Russian actions in Syria seem calculated to make major battlefield advances as quickly as possible. Baltic officials have seen a recent spike in cyberattacks. U.S. intelligence agencies say that Russian state-sponsored hackers are behind the leaks of emails of Democratic officials, which have been an embarrassing trickle seemingly calculated to cast doubt on the legitimacy of the election. On Russian state-run television, one prominent anchor repeated a warning that Russia could turn the United States into radioactive ash.

"One of the very important dates is the 8th of November. They're trying to create a better negotiating position in Syria, in Ukraine, perhaps somewhere else," said Marko Mihkelson, the chairman of the Estonian parliament's National Defense Committee. "It's a lame duck. And they'll immediately test the new U.S. president with a very difficult position."

Putin has acknowledged that he is looking past Obama and toward the next occupant of the White House.

"There are many issues it has become difficult to discuss with the current administration, because practically no obligations are met and no agreements are respected, including those on Syria," Putin said late last month. "We are ready, in any case, to talk with the new president and look for solutions to any, even the most difficult, issues."

But there is a risk of the Kremlin's strategy backfiring, analysts say.

The demands attached to Putin's suspension of the plutonium-disposition agreement were "clearly meant to be flipping the bird, in diplomatic terms," said Alexander Vershbow, a veteran U.S. diplomat who until last month was the deputy secretary general of NATO. "They've got to be careful not to get onto an even worse footing with the new U.S. administration."

Vershbow said that the situation is as unstable as he had seen since he began his career in the late 1970s. During the late years of the Soviet Union, the Kremlin held to predictable rules of behavior, but now it does not, he said.

Defense officials say the flights in the Baltics are ultimately more annoying than menacing and that the Russian planes do not appear to be readying an attack on NATO nations. But they say that the behavior raises the risk of in-air accidents, which could escalate the already tense relations between Russia and the West. One senior Western defense official said that if an armed Russian fighter jet were to lock its targeting radar onto a NATO plane, that could be grounds to shoot it down. NATO jets have scrambled to intercept planes about 600 times this year, the vast majority of them in international airspace.

NATO plans to raise its concerns regarding the situation over the Baltic Sea with Russia in a meeting of the NATO-Russia Council, said Dylan White, an acting spokesman for the alliance. The council, which has met only rarely in the years since the Crimea annexation 0f 2014, will convene soon, White said.

Baltic defense officials say the Russian incursions could be far worse without NATO's presence in the region.

"We see them attempting to challenge and test our systems constantly," said Estonian Defense Minister Hannes Hanso, whose nation has no weapons-ready fighter jets of its own. On a recent chilly morning at the country's only air base, advanced German Eurowings fighter jets were taking off as an ancient Estonian Air Force An-2 biplane's single propeller was thrumming loudly in the wind. The base once belonged to the Soviet Union, and the red star of the Soviet Air Force is still displayed prominently on the gravestones in a cemetery visible from the road leading onto the base.

Because of the Baltic nations' weak air capabilities, NATO has operated a small air-policing mission based in Lithuania since the countries joined the alliance in 2004. After Russia annexed Crimea, the effort was expanded, given the new demands.

Estonian leaders say that despite the attention paid to Russia's attempts to subvert political processes in other countries via new routes such as hacking and media influence, the conventional threat remains the most concerning.

When it comes to military power, "we cannot handle ourselves," said Juri Luik, a former Estonian diplomat and politician who is the head of the Tallinn-based International Center for Defense and Security. "We need help from our allies. The Russians want to signal in a thousand different ways that they are the top dog, this is their area."

Jacob, the commander of the German detachment in Estonia, said that the NATO protocols are clear. If the Russian planes are flying in international airspace, as they nearly always do, there is no need to do anything more than monitor them and perhaps take pictures with the digital cameras the pilots keep strapped to their right shoulders.

But if a Russian plane violates NATO airspace - which has happened five times in Estonia this year - the situation could quickly escalate. The alliance's rules of engagement are to try to communicate via radio. If that produces no response, pilots fly their plane on their sides to show off their weaponry, and then they try to push the aircraft out of NATO territory. A pilot also could fire a warning flare - but any decision to actually fire on the plane would be left to higher-ups at NATO, Jacob said.

There are moments that break the tension, such as when a Russian pilot got on the radio to wish his German counterpart a Merry Christmas at the end of 2014, Jacob said. But pilots take their task seriously, he said.

"They know what could happen if they do something wrong, something idiotic or crazy, and I think the Russians do, too," he said.