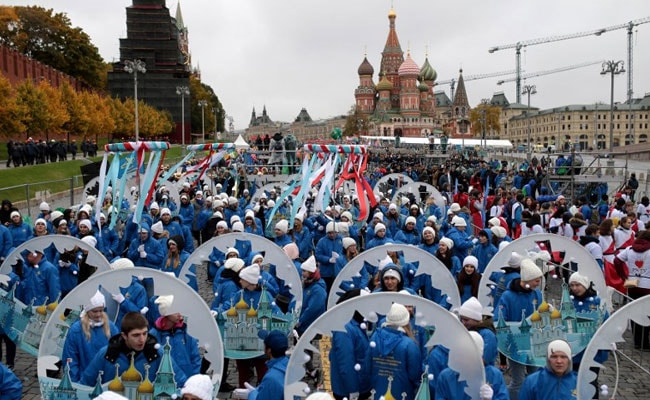 Moscow: Russian President Vladimir Putin is on Sunday expected to speak at a youth festival launched in the Soviet era, in his latest effort to appeal to young Russians ahead of the presidential election next year.

The World Festival of Youth and Students was initiated by the USSR and the Eastern Bloc after World War II and Russia is hosting the 19th festival Sunday in Sochi's Olympic park on the Black Sea, following a Soviet-style parade in Moscow Saturday that boasted 10,000 foreign guests.

Putin, who is widely expected to run for re-election next year though has not formally announced his participation, will visit the opening in Sochi along with Foreign Minister Sergei Lavrov and other officials.

The forum, which uses guerrilla icon Che Guevara as a symbol,  has the motto "For Peace, Solidarity and Social Justice, we Struggle Against Imperialism."

The World Youth Festival first took place in Czechoslovakia in 1949 and was hosted by Communist states around the world in the second half of the 20th century. Six events have been held since 1989, with North Korea, Cuba and Venezuela among the host nations.

The USSR hosted the event twice: once in 1985 shortly after Mikhail Gorbachev became Soviet leader and most famously in 1957, when thousands of foreigners descended on Moscow for the first time during Khrushchev's political thaw.

Sixty years later, this year's student parade in Moscow echoed the 1957 festival which Russians remember as marking the beginning of a new, more open USSR.

On Saturday, students walked through central Moscow with flags of different countries.

The rainy weather kept some people away and the spectators consisted mainly of the over-50s of people over 50, some teary-eyed with nostalgia.

The 1957 festival "was a breakthrough for the West and for the East," according to Russian historian Alexander Shubin.

"The West saw that normal people live in the USSR while Soviet citizens saw what foreigners look like for the first time."

This year's festival will have a different vibe. While hosting an exhibition on the lessons of the 1917 October Revolution, the leftist festival's programme also includes workshops on how to set up a business and a display of Dutch tulips.

"It's a borscht of contrary ideas," political analyst Konstantin Kalachev told AFP. "Che Guevara does not fit in with the protectionism of the conservative government."

Putin, is expected to use the platform to get young Russians on his side ahead of next year's vote.

The Kremlin has been trying hard to appeal to the under-30 crowd and Putin's presidential campaign is widely anticipated to be centred around youth policy.

The Kremlin's campaign to woo young Russians was accelerated by the increased participation of youngsters, including many underage teenagers, in anti-Putin protests this year, galvanised by internet savvy opposition politician Alexei Navalny.

"The government was worried when young people took to the streets," said Kalachev.

"They realised that a whole generation of non-conformists could soon come of age."

The World Festival of Youth and Students was planned before the opposition protests took place, but also falls within the Kremlin's agenda to boost Putin's popularity.

"They are trying to form a loyal pro-presidential youth or at least minimise the political activity of youths," said Kalachev.

But the problem, analysts say, is that the Kremlin's youth policy often copies the old Soviet methods.

Promoted
Listen to the latest songs, only on JioSaavn.com
"They organise meetings that last for hours, they speak at chess competitions - this is all very Soviet," said Makarkin.


(This story has not been edited by NDTV staff and is auto-generated from a syndicated feed.)
Comments
Vladimir PutinWorld Festival of Youth and StudentsUSSR