A UN Security Council resolution for a 30-day truce had remained a dead letter since it was passed on Saturday, and Moscow, the Damascus regime's main backer, ended up setting its own terms to stem one of the worst episodes of bloodletting in Syria's seven-year-old conflict. 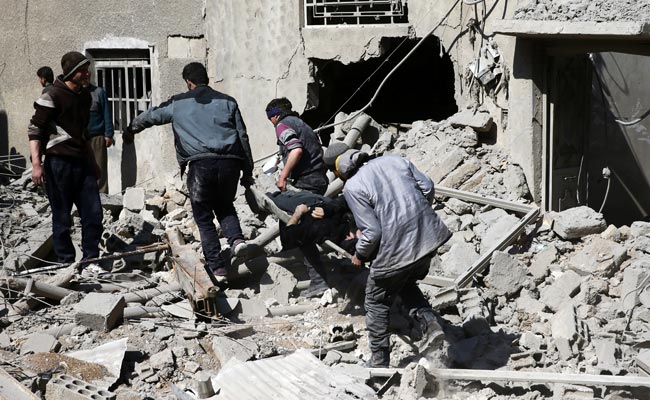 More than 550 civilians have been killed in Eastern Ghouta in past few days. (File)

Douma, Syria: Russia called a daily "humanitarian pause" in Syria's Eastern Ghouta, bowing to pressure to halt the carnage in the rebel-held enclave where bombardments eased late Monday after hours of deadly raids.

A UN Security Council resolution for a 30-day truce was a dead letter since it was passed on Saturday, and Moscow, the Damascus regime's main backer, ended up setting its own terms to stem one of the worst episodes of bloodletting in Syria's seven-year-old conflict.

The United Nations, France and Germany had made pressing appeals for Russian President Vladimir Putin to demand its Damascus ally enforce a ceasefire, including in Eastern Ghouta where more than 500 civilians were killed last week.

Putin agreed to a five-hour daily window that would allow residents of the battered enclave east of the capital to emerge from their underground shelters.

"On the instructions of the Russian president, with the goal of avoiding civilian casualties in Eastern Ghouta, from February 27 -- tomorrow -- from 9:00 to 14:00, there will be a humanitarian pause," said Russian Defence Minister Sergei Shoigu.

According to a statement sent to AFP, he said there should be similar pauses in the southern Al-Tanf border region and Rukban, near the Jordanian border.

Shoigu said "humanitarian corridors" would be opened to allow civilians to leave.

The public would be informed with leaflets and text messages, and buses and ambulances would be waiting at a crossing to evacuate the sick and wounded, Moscow said.

"Forcing civilians to leave or face death under bombardment and siege constitutes a Russian crime," its spokesman Wael Alwan said on Twitter.

UN spokesman Stephane Dujarric said "five hours is better than no hours, but we would like to see an end to all hostilities extended by 30 days, as stipulated by the Security Council."

"We will do our best... to deploy our trucks and humanitarian workers in this area," he added.

Washington pointed the finger sternly at Moscow, demanding it use its "influence" to completely halt the offensive.

"#Russia has the influence to stop these operations if it chooses to live up to its obligations under the #UNSC ceasefire," US State Department spokeswoman Heather Nauert tweeted.

"The United States calls for an immediate end to offensive operations and urgent access for humanitarian workers to treat the wounded and deliver badly needed humanitarian aid."

Russia's defence ministry warned the situation in Eastern Ghouta was "continuing to escalate."

The intensity of the bombardment on Eastern Ghouta had eased somewhat in the past 48 hours but deadly strikes and shelling never stopped.

At least 22 civilians, including seven children, were killed in new raids and artillery fire by the regime, said the Syrian Observatory for Human Rights war monitor.

"The shelling of Ghouta stopped at 4:00 pm, before resuming in the early evening in a limited way," said Observatory director Rami Abdel Rahman.

"But artillery fire continued against the Al-Marj area," where clashes were ongoing between pro-regime forces and Jaish al-Islam rebels, he added.

The bombardment was very heavy overnight in Douma and impeded rescuers in their work.

The regime intensified its air campaign against Eastern Ghouta, which has been outside government control since 2012, early this month.

On February 18, the Syrian government further turned up the heat on the territory controlled by Islamists and terrorists.

More than 550 civilians, almost a quarter of them children, have since been killed and extensive destruction wrought on the enclave's towns.

Remaining hospitals and clinics have struggled to treat over 2,000 people wounded during the same period.

The United Nations said 76 percent of private housing in Eastern Ghouta has been damaged.

Residents trapped in the wreckage of their own homes have bled to death as even rescuers were targeted.

Much of the nearly 400,000-strong population of Eastern Ghouta has moved underground, with families pitching tents in basements and venturing out only to assess damage to their property and buy food.

On Sunday, a child died and 13 others suffered breathing difficulties and showed symptoms consistent with a chlorine attack after a regime air raid struck the town of Al-Shifuniyah, the Observatory and a medic said.

Russia dismissed reports of a chemical attack as "bogus stories."

The regime has reinforced its deployment around the enclave in the past month, raising fears of a ground offensive that aid groups have warned could cause even greater suffering.

With the ISIS group's once sprawling "caliphate" now wiped off the map, the regime has looked bent on completing its reconquest and Eastern Ghouta is a key target.

The terrorists only control an estimated three percent of Syria territory, small pockets that various anti-ISIS forces continue to flush out.

Another flashpoint in Syria has been the northern region of Afrin, where Kurdish forces have come under attack from neighbouring Turkey since January 20.

Turkey has warned it did not consider that the UN ceasefire resolution, whose wording excludes operations against terror groups and goes beyond Eastern Ghouta, should affect its offensive on Afrin.

Promoted
Listen to the latest songs, only on JioSaavn.com
Macron called Turkish President Recep Tayyip Erdogan, who considers the Syrian Kurdish militia to be "terrorist," to stress the truce should apply there too.