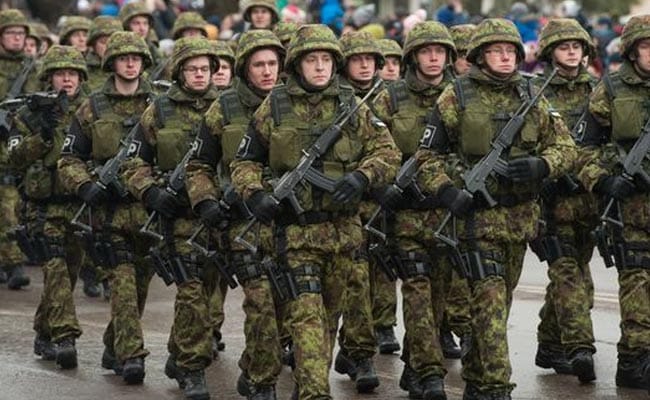 Stockholm: Russia became the world's third largest military spender in 2016 despite low oil prices and economic sanctions, as the global expenditure rose for a second consecutive year, a study said on Monday.

Russia's military spending was $69.2 billion (around 64 billion euros) in 2016, a 5.9 percent rise over 2015, the Stockholm International Peace Research Institute (SIPRI) said in a report, adding this was the highest proportion of its GDP since it became an independent state.

"This increased spending and heavy burden on the economy comes at a time when the Russian economy is in serious trouble due to low oil and gas prices and the economic sanctions imposed since 2014," (by the West over the Ukraine conflict), SIPRI said.

Saudi Arabia was the third largest spender in 2015 but dropped to fourth place in 2016 as its expenditure fell by 30 percent to $63.7 billion, "despite its continued involvement in regional wars", it added.

The US remained the top spender as its expenditure grew by 1.7 percent between 2015 and 2016 to $611 billion while China boosted its expenditure by 5.4 percent to $215 billion, a lower rate than in previous years.

SIPRI said the rise in US military spending in 2016 "may signal the end of a trend of decreases in spending" caused by the 2008 economic crisis and the withdrawal of US troops from Afghanistan and Iraq.

On April 13 the US dropped its largest ever non-nuclear bomb, hitting Islamic State group positions in a remote area of eastern Nangarhar province in Afghanistan.

"Future spending patterns remain uncertain due to the changing political situation in the USA," Aude Fleurant, Director of the SIPRI Arms and Military Expenditure (AMEX) programme, said in a statement.

Hit by a series of terror attacks since 2015, Western Europe raised its military expenditure for the second consecutive year, up by 2.6 percent in 2016.

Overall military spending in Central Europe jumped by 2.4 percent in 2016.

"The growth in spending by many countries in Central Europe can be partly attributed to the perception of Russia posing a greater threat," said senior SIPRI researcher Siemon Wezeman in the statement.

Promoted
Listen to the latest songs, only on JioSaavn.com
"This is despite the fact that Russia's spending in 2016 was only 27 per cent of the combined total of European NATO members," he added.