US Man's Toddler Was Keeping Him Up, So He Nearly Decapitated The Child, Police Say

According to police, Rolando Ortiz's frustration quickly escalated to brutal violence: He grabbed his toddler in the kitchen and held him down. With a kitchen knife, Ortiz slashed the child's throat, nearly decapitating him, police said. 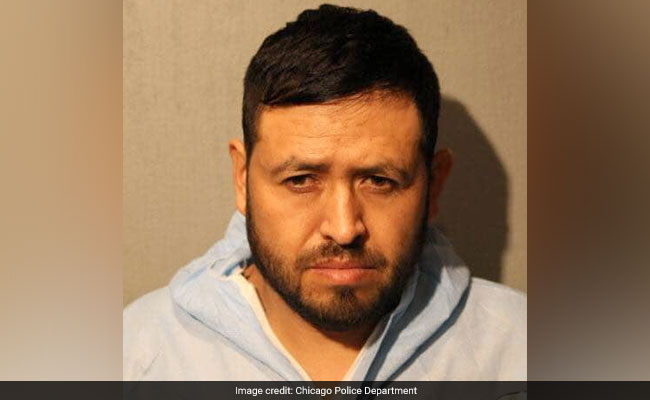 After realising he killed his own son, Rolando Ortiz tried to then commit suicide (WP)

Two-year-old Mateo Garcia Aguayo was alone with his father while his mother was at work Wednesday.

The little boy was running around his family's apartment in Chicago's Little Village neighborhood. His father, Rolando Ortiz, grew frustrated because he was trying to sleep. According to police, Ortiz's frustration quickly escalated to brutal violence: He grabbed his toddler in the kitchen and held him down. With a kitchen knife, Ortiz slashed the child's throat, nearly decapitating him, police said.

Mateo's "brutal and horrific slaying" capped off a difficult week and a half for the Chicago Police Department, Superintendent Eddie Johnson told reporters Thursday. Cmdr. Paul Bauer was buried Saturday after he was killed in the line of duty Feb. 13.

Ortiz, 37, tried to commit suicide by making "a pretty weak attempt to cut his own wrists" after he realized that he had killed his son, Cmdr. Brendan Deenihan told reporters. Ortiz found a garbage bag full of clothes, emptied it and placed his child's body in the bag, police said. Then he called his wife, but he was unable to reach her. Deenihan said Ortiz called his sister-in-law and "basically confessed to killing the baby over the phone."

Confused and worried, his sister-in-law called family members who live in the same apartment building as Ortiz and asked them to go upstairs to check on the boy. Two relatives went to the apartment to find Mateo in the garbage bag and Ortiz bleeding from his wrist, Deenihan said. They called 911. Ortiz left and drove away.

Police found and pulled him over 60 miles away, in Kankakee, Illinois. Police spokesman Anthony Guglielmi announced on Twitter on Wednesday evening that a "person of interest" was taken into custody and would be interrogated by detectives. Ortiz confessed to the crime, police said.

Chicago Police and @FBIChicago will announce charges tonight against Rolando Ortiz, 37 for the brutal slaying and near decapitation of 2 year old Mateo Aguayo. Briefing at CPD HQ at 615pm pic.twitter.com/xMfoDMlSr9

Deenihan said authorities expect Ortiz to be charged with murder. He said Ortiz had intended to go to Mexico.

It remains unclear why Ortiz's temper might have escalated so quickly or whether factors such as mental health were in play. Investigators do not believe drugs or alcohol were involved. Deenihan said Ortiz did not have an arrest record in Chicago.

Ortiz has other children, though none was at home at the time of the incident, Deenihan said.

"These are the kinds of tragedies that keep police officers working without sleep because many of us are parents," Johnson told reporters. "We want to bring Mateo's family the same justice we would expect for our own children."

He added later: "I'd like to say to Mateo's family that as a father, I know there is nothing we could ever do to bring Mateo back to you, but I hope this would give some level of closure as you keep Mateo's memory close to your hearts."

A memorial of balloons, stuffed toys and flowers has been erected in the Little Village neighborhood. In the middle is a basketball and a white cross bearing the little boy's name.

Mateo is among the nearly 70 people killed by homicide so far this year in Chicago, a city that has seen a high number of violent crimes in recent years. According to the Chicago Tribune's data, 674 homicides - an average of nearly two a day - occurred in the city in 2017. Though alarming, that number is an improvement from 2016, when nearly 800 homicides happened in the city.

(Except for the headline, this story has not been edited by NDTV staff and is published from a syndicated feed.)
Comments
Rolando OrtizMateo Garcia AguayoEddie Johnson