The FBI is investigating the stunning heist, which has raised concerns about the security of commercial aircraft and mental health issues among airline workers nearly 17 years after the Sept. 11, 2001, attacks. 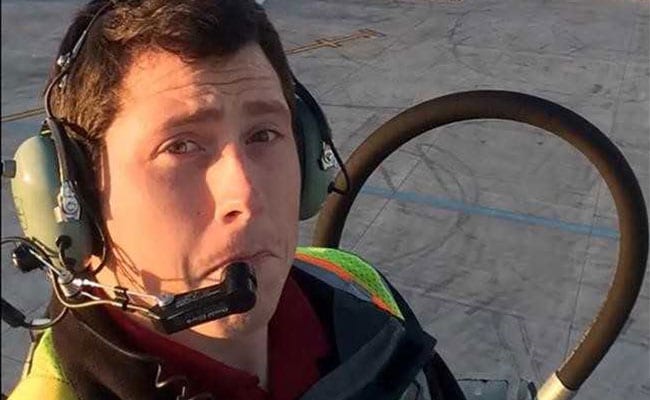 Richard Russell was a ground services worker for Horizon Air.

The hardest part of stealing a commercial plane from an international airport was already over for Richard Russell.

Russell, a ground services worker for Horizon Air, was permitted to get very close to passenger aircraft. And part of his job was to drive the tractor that backed the aircraft into position for takeoff.

He spun a plane around Friday evening without raising suspicion and climbed aboard with 76 empty seats behind him. He would have flipped overhead switches and set the propellers of the Bombardier Q400 spinning before he roared away from Seattle-Tacoma International Airport.

It's not clear whether Russell, 29, had ever really flown a plane before. But that flight was his last.

Russell flew wild loops over Puget Sound, screamed low over frightened onlookers and had existential - and, at turns, bizarre - chats with air traffic controllers as two Air Force F-15 jets gave chase. Then, about an hour after he took off, Russell plunged into sparsely populated Ketron Island 25 miles southwest of the airport, sparking an intense fire.

He is presumed dead in the crash, but no one else is thought to be injured or killed, and the fighter jets did not fire on him, authorities said. The FBI is investigating the stunning heist, which has raised concerns about the security of commercial aircraft and mental health issues among airline workers nearly 17 years after the Sept. 11, 2001, attacks.

It has also suggested that Russell was more complicated than the easygoing persona of his known online footprint. Now a family is left to reckon with tragedy, while strangers find grim inspiration in his final act.

But there appears to be no manifesto, no digital trail of warning signs from Russell. He grins in selfies at work. He and wife Hannah started a bakery in Oregon in their early 20s, according to a 2012 story in a local paper depicting a happy, determined couple. In one blog, he describes aspirations to land a management job or join the military.

And in recordings of conversations with air traffic controllers, Russell jokes and laughs, though he is at times contemplative and raw. He appears regretful about the pain he knows will inevitably visit his family.

The Russell family released a statement Saturday evening, saying they were "stunned and heartbroken" over the incident and the loss of a man they called Beebo.

"It may seem difficult for those watching at home to believe, but Beebo was a warm, compassionate man. It is impossible to encompass who he was in a press release. He was a faithful husband, a loving son, and a good friend," the family said in the statement, read by friend Mike Mathews, ABC reported.

In a video he posted for a college class in December, Russell jokes about the sometimes mundane duties of his job.

It was worth it, he says, to conveniently travel to Alaska, where he grew up, to visit family.

Speculation has swirled over Russell's intent. He could have envisioned an aerial joyride and return to the ground. Or he could have had grim plans to take his own life. Russell told air traffic controllers that he was a "broken guy" with a "few screws loose," but also that he wanted to avoid injuring innocent people.

His family's brief statement did not address any potential mental health issues. Authorities described him as "suicidal."

"Beebo's intent was not to harm anyone and he was right in saying that there are so many people who loved him," Mathews said. The statement, he added, was the only one that will be released.

Authorities said they did not believe he had a pilot's license. Gary Beck, the chief executive of Horizon Air, told reporters Saturday that the acrobatics and maneuvers, including barrel rolls and one loop that brought Russell feet from the water's surface, were "incredible."

Russell told controllers midflight that he played video games in preparation, but it was not clear whether he meant flight simulators - some of which are commercially available and depict exhaustive and realistic measures to start an aircraft.

His conversation with controllers reveals limited experience. At one point, he explains he doesn't know how to follow instructions to "punch in" data or how to assess his fuel consumption after takeoff. In another moment, Russell says he is lightheaded and talks about adjusting the cabin pressure, but it is not clear whether he was able to do that.

Videos posted to social media show the other side of his skills. He tilts the wings and rumbles low over Puget Sound.

"To be honest with you, commercial aircraft are complex machines. They're not as easy to fly as, say, a Cessna 150," Beck said. "I don't know how he achieved the experience that he did."

Perhaps it was because the only life he seemed to have taken was his own. Or that he appeared to be a happy, regular guy.

But as the cockpit recordings and videos of Russell's antics spread, and internet users uncovered his online postings, his final act drew both admirers and detractors.

"He did a barrel roll in a stolen plane and went out in a blaze of glory. Will many of us have a better story to tell when we get to wherever we're going," one Reddit user says in a thread. Another called it "cathartic and liberating."

Others said it was wrong to glorify him for an act that could have killed more people.

Social media accounts of Russell have become funeral guestbooks, digitized for the world. Mourners gathered in the comments section of his YouTube video.

"RIP Rich. You went out the way most of us dream," one user wrote. "The candle that burns twice as bright burns half as long," another said.

A moniker quickly took hold, echoed by others.

"RIP Sky King," a user wrote. "You seemed like a nice guy and a hell of a natural pilot."