Reuters Journalists In Court 100 Days After Arrest For Rohingya Reportage

The court in Yangon is holding preliminary hearings to decide whether reporters Wa Lone, 31, and Kyaw Soe Oo, 28, will face charges. 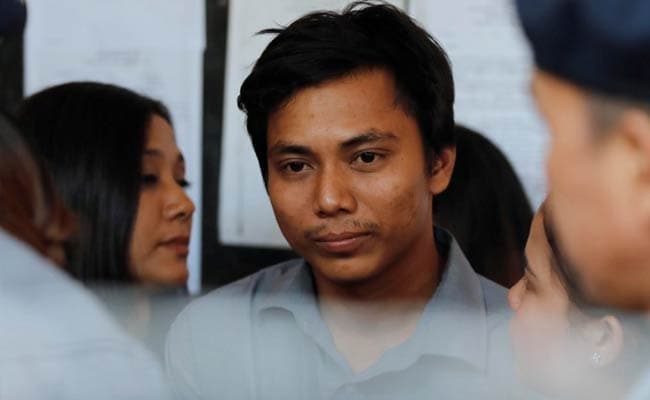 After the arrests of the reporters, the military said its soldiers took part in the killing. (Reuters)

Yangon: Two Reuters reporters appeared in a Myanmar court for the 11th time on Wednesday, which marked 100 days since they were arrested in December and accused of possessing secret government papers.

The court in Yangon is holding preliminary hearings to decide whether reporters Wa Lone, 31, and Kyaw Soe Oo, 28, will face charges under the colonial-era Officials Secrets Act, which carries a maximum penalty of 14 years in prison.

"We have spent 100 days in prison," Wa Lone told reporters during a break in proceedings. "Our journalism spirit was never down even after spending many days in there."

Wa Lone's younger brother Thura Aung, 26, gave testimony on Wednesday, describing a police search of the family home on the evening of Dec. 13, the day after the journalists were arrested.

Thura Aung said that police who searched the house in north Yangon did not show a warrant, identify themselves or explain the reason for the search, during which a laptop, charger and bag, a hard drive and an old notebook were seized.

His testimony contradicted Police Major Soe Aung, who told the court two weeks ago that police had presented a warrant to Wa Lone's family when they arrived.

Defence lawyer Than Zaw Aung told reporters after the hearing that under Myanmar's Criminal Procedure Code police must identify themselves and explain the reasons for their search.

"In the criminal procedure, the search officer must show the search warrant at the search place," he said.

Lead prosecutor Kyaw Min Aung left the court building before Reuters was able to put questions to him after the hearing. At previous hearings he has declined to speak to reporters.

Government and police spokespeople have declined to comment on the case, citing the ongoing court proceedings. The date of the next hearing was set for March 28.

The journalists have told relatives they were arrested almost immediately after being handed some rolled up papers after being invited to a restaurant by two police officers they had not met before.

Wa Lone and Kyaw Soe Oo had been investigating the killing of 10 Rohingya Muslim men in a village in western Myanmar's Rakhine state during a military crackdown in August.

The crackdown, which the United Nations has said was ethnic cleansing, has sent nearly 700,000 people fleeing to Bangladesh.

After the arrests of the reporters, the military admitted its soldiers took part in the killing.

"They have been detained in Myanmar since December 12 simply for doing their jobs as journalists," Reuters President and Editor-in-Chief Stephen J. Adler said in a statement.

"Wa Lone and Kyaw Soe Oo are exemplary individuals and outstanding reporters who are dedicated to their families and their craft. They should be in the newsroom, not in prison."

Myanmar's ambassador to the United Nations, Hau Do Suan, said last month that the journalists were not arrested for reporting a story, but were accused of "illegally possessing confidential government documents".

Judge Ye Lwin declined a defence attempt to submit the Reuters report describing the killings at the village of Inn Din as evidence, citing a decision at an earlier hearing not to admit the story at this stage in the proceedings.

Senior United Nations officials, Western nations and press freedom advocates have called for the release of the journalists.

The U.S. Embassy in Yangon tweeted: "Today is the 100th day in detention from reporters Wa Lone and Kyaw Soe Oo. Freedom of the press remains critical for Myanmar's democratic transition."

The Danish embassy, which has closely monitored the case, said the pair had spent "100 days behind bars for ensuring the public's right to information".

A statement from Sweden's embassy said: "We believe they have done nothing wrong and that the charges against them should be dropped immediately."

EU Ambassador to Myanmar Kristian Schmidt, asked about the journalists' reporting of the Rakhine crisis, said it was imperative to establish what had taken place there.

(This story has not been edited by NDTV staff and is auto-generated from a syndicated feed.)
Comments
Reuters journalistsRohingya issueJournalist arrested