Rare Skin Disease Left Him Isolated. Surgery Gave Him Back His Life

Enrique Galvan was diagnosed with a rare genetic disorder called neurofibromatosis, that caused benign tumors to form on his nerve tissue. 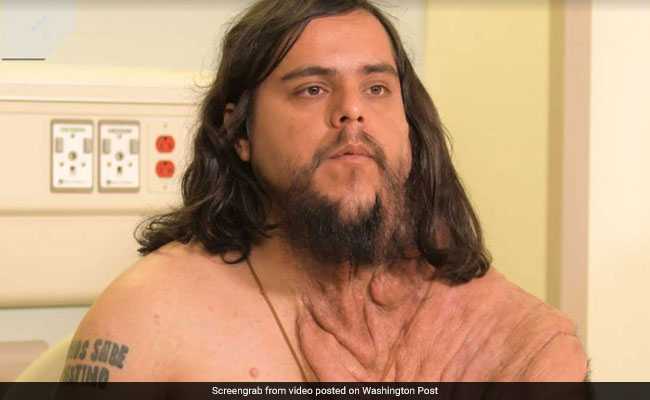 When Enrique Galvan was growing up in Paraguay, other children called him a monster.

When he was a toddler, a rare genetic disorder called neurofibromatosis was diagnosed, and it caused benign tumors to form on his nerve tissue and create what appeared to be pieces of extra skin drooping from his head, neck and face. It wasn't until he was old enough to go to school that he started to notice - and other children did, too.

"The bullying started at the age of 5. That's when the other kids started taunting me with insults," Galvan, now 27, said through a translator during a phone interview Wednesday with The Washington Post. "Then it got even worse as I got older. So once I got older, the insults and the isolation became even worse."

He said that as a teenager, he turned to drugs - first marijuana, then cocaine - to deal with the pain of being "marginalized from other people."

"It got to the point where they would totally ignore me and turn their back on me," he said of the treatment from peers. "It was as if I didn't exist."

Over the years, Galvan had numerous surgeries in Paraguay to try to remove the large, heavy tumors hanging from his body. But because of the extensive nature of his case, the procedures were not successful. Ultimately, doctors in his home country told him that there was nothing more they could do for him.

After a medical mission trip to Paraguay last year and a plan to bring Galvan back to the United States for treatment, the University of California-Irvine Medical Center decided to offer a free surgery for him. This month, surgeons and other medical personnel worked for eight hours to remove about six pounds of extra skin tissue from his chest, shoulder and back to help give him a more normal life, said Cristobal Barrios, a UCI Health trauma surgeon.

Galvan was 3 when he received the diagnosis of neurofibromatosis, which some people incorrectly call "elephant man's" disease.

Dusica Babovic-Vuksanovic, a physician who specializes in genetic syndromes and leads the Neurofibromatosis Clinic at the Mayo Clinic, said neurofibromatosis is rare, affecting 1 in about 3,000 people in the United States.

Babovic-Vuksanovic said the disorder is difficult to manage because it can present in different forms and on different parts of the body, causing usually benign but sometimes rapid-growing tumors to form on nerve tissue. It can cause disfigurement, muscular and skeletal problems, nerve damage and pain. In rare cases, she said, the growths can develop into cancerous tumors.

In cases in which there appears to be excessive skin, Babovic-Vuksanovic said that extra tissue is usually associated with a tumor known as plexiform neurofibroma.

Treatment for neurofibromatosis is temporary and typically involves surgery, but Babovic-Vuksanovic said a clinical trial is underway at Mayo Clinic and other larger medical centers for a medication that may help shrink the tumors.

For years, Galvan suffered in secret. He said he never told his parents how he was bullied in their hometown of Luque, a suburb of the Paraguayan capital, Asuncion.

Galvan said through a translator, Jeff Crider, that he started using marijuana when he was 14, and by 17 was using cocaine. "By the time I was 21, I realized this was not the right path for me, and that's when I asked God for help," Galvan said.

He explained that he became involved in a Catholic community group, and "that's when I started to become familiar with Jesus, and he started healing me of everything I had been suffering, including all of my vices."

Still, Galvan said, he had lost hope that surgeons in Paraguay would be able to treat his physical problems, noting that they could not get very far with the surgeries because of the risk of too much blood loss.

Galvan said a friend noticed last summer that a medical humanitarian outreach called IMAHelps was planning to visit Luque, and he encouraged Galvan to see the doctors. Mark Kobayashi, a plastic and reconstructive surgeon with UCI Health, and Barrios, who is the trauma surgeon, were among them.

Barrios said the doctors first met Galvan in late July in an intake tent outside a hospital. After an examination, he said, they had to explain to Galvan that because of potential bleeding risks and the need for intensive care and follow-ups, the surgeons could not perform the procedure in Paraguay.

Barrios said the "look of disillusion" on Galvan's face haunted the surgeons, so Barrios started working with his hospital in Southern California to see what could be done.

One Sunday late last month, Galvan flew to California. "I was anxious and eager to arrive as soon as possible, but I was also very happy," he said through Crider, an IMAHelps board member.

Galvan said he went to the beach, made a trip to Hollywood and spent the day leading up to his surgery at Disneyland. His favorite ride? Thunder Mountain, he said.

On June 2, Galvan went into surgery "confident that the doctors knew what they were doing and that they would do well," he said.

Barrios said Galvan had so much extra skin tissue on his upper torso that it was limiting his range of motion and forcing him to compensate by overusing certain muscles.

Barrios said that eventually some of the tumors will grow back, but that could take years. Other tumors may never grow back, he said.

Galvan said he is "more than pleased." He said life is already changing for the better because when he gets home, "I'm going to be able to do some of the things I want to." Galvan, who enjoys running and soccer, plans to return home soon and said he is looking forward to getting back on the soccer field.

But, he said, he also wants to help others - using his own life as an example to encourage them not to lose faith.