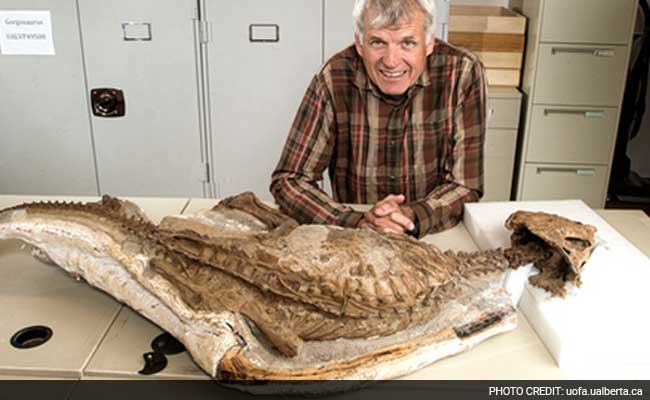 File Photo of scientist Philip Currie as he displays the pristine, near-complete skeleton of a baby Chasmosaurus, a relative of the Triceratops, he found in Alberta's badlands.

Toronto: The discovery of a 75-million-year-old dinosaur fossil in 2010 from Canada's Dinosaur Provincial Park in Alberta has now provided scientists an opportunity to fill in gaps in the evolution of other horned dinosaurs, such as Triceratops.

"For the first time ever, we have a complete skeleton of a baby ceratopsid," says professor Philip Currie from the University of Alberta.

"We've only had a few isolated bones before to give us an idea of what these animals should look like as youngsters, but we've never had anything to connect all the pieces. All you need is one specimen that ties them all together. Now we have it," Mr Currie added.

According to Currie, the discovery of juvenile Chasmosaurus allows for the refinement of previous findings.

"One of the greatest benefits is that we can now look at the different body proportions for Chasmosaurus as it grew up."

"We now have an anchor point with the baby that we can compare with all other specimens of this species, and from that comparison can calculate the dimensions, body weights, and ages for all other ceratopsid species. We can start filling in missing pieces," the professor adds.

"Unless you've got that basic anatomical information, you're kind of shooting in the dark with all of these other calculations," Mr Currie said.

Currie and his team found that juvenile Chasmosaurus' skeleton was unexpectedly different in shapes and relative proportions with adult Chasmosaurus.

"There was no doubt in our minds that a baby would have had a much shorter frill relative to its skull length than an adult. But what we couldn't see is that it also has a different shape," the researcher said.

"Now with a full skull of a juvenile in which the bones actually articulate with each other, we can see that in Chasmosaurus, the back of the frill isn't broad and squared off the same way that it is in an adult," he added.

"In fact, the frill narrows towards the back. And instead of being flat on top from one side to the other, the frill is arched and has a ridge running down the middle of it," says Currie. "It is very different than I expected."

The findings were published in the Journal of Vertebrate Paleontology.