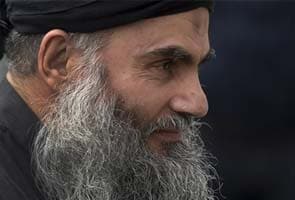 London: A radical Islamist cleric described by prosecutors as a key al-Qaeda operative in Europe was jeered by protesters Tuesday after he was freed from prison following a court ruling that he cannot be deported to Jordan to face terrorism charges.

Abu Qatada was seen smiling as he was driven away from Long Lartin maximum security jail in Worcestershire, central England, in a black MPV.

As the Palestinian-born Jordanian cleric arrived at his home in London, a small number of demonstrators gathered to demand his expulsion from Britain, holding aloft a banner that read: "Get rid of Abu Qatada."

Britain's government has attempted since 2001 to remove Abu Qatada, who was convicted in his absence in Jordan over terror plots in 1999 and 2000, but has been repeatedly thwarted by European and British courts.

The cleric won bail at a hearing Monday, when the Special Immigration Appeals Commission, which handles major terrorism and deportation cases, upheld his challenge to Britain's decision to send him to Jordan.

Judge John Mitting said he was not convinced the cleric would receive a fair trial, despite the government's insistence that it has won assurances from Jordan over how Abu Qatada's case would be handled - including from Jordan's King Abdullah II. Cameron's office said Abdullah would visit Britain next week.

Mitting said there remained a real risk that evidence obtained through torture would be used against Abu Qatada, which would be a breach of his human rights.

Under the terms of his bail, Mitting said, the cleric must observe a 16-hour curfew, wear an electronic anklet, cannot use the Internet and is barred from contacting certain people.

Britain's government has said it will appeal against Mitting's ruling, arguing that he applied the wrong criteria in making his decision.

"I am completely fed up with the fact that this man is still at large in our country," Cameron said Tuesday, during a visit to Rome for talks with Italian officials. "He has no right to be there - we believe he is a threat to our country."

Abu Qatada has previously been described in courts in Britain and Spain as a senior al-Qaeda figure in Europe who had close ties to the late Osama bin Laden.

He is accused by Britain of links with Zacarias Moussaoui, the only person charged in the United States over the Sept. 11, 2001, terrorist attacks, and with shoe bomber Richard Reid. Audio recordings of some of the cleric's sermons were found in an apartment in Hamburg, Germany, used by some of the Sept. 11 hijackers.

Authorities first tried to deport Abu Qatada in 2001, then detained him in 2002 under anti-terrorism laws, which at the time allowed suspected terrorists to be jailed without charge.

Though he was released in 2005 when the unpopular law was overturned, the cleric was kept under close surveillance. He was most recently arrested in April, to be held in custody pending his planned deportation to Jordan.