Queen Elizabeth: An estimate of 750,000-1 million mourners are expected to file past the queen's coffin inside parliament from Wednesday afternoon. 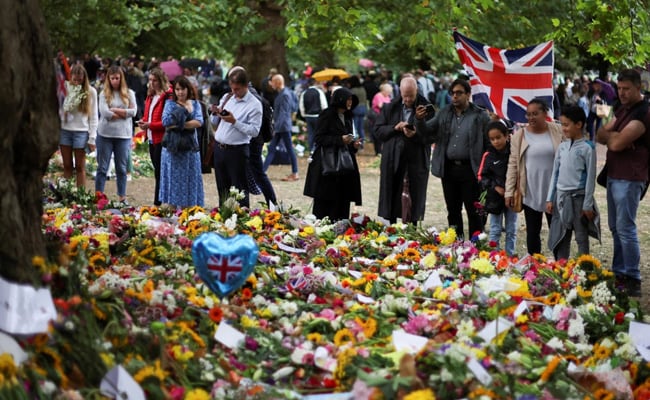 People look at the floral tributes in Green Park, following the death of the queen.

Mourners in London are preparing for a long and arduous wait before they can pay their respects to the late Queen Elizabeth in person, as a queue expected to stretch for miles through the capital began to form on Tuesday.

A small group of people lined up near Lambeth Bridge on Tuesday - the first of an estimated 750,000-1 million mourners expected to file past the queen's coffin inside parliament from Wednesday afternoon.

"Nobody does pomp and circumstance like the British royal family, and so it's going to be an amazing few days," said 55-year-old Israels-Swenson, a road traffic controller who grew up with a picture of Queen Elizabeth on his wall at home.

He was among a core of royal fans who had begun queuing about half-a-mile away from the Houses of Parliament, where the queen's body will lie in state inside Westminster Hall for nearly five days.

Dozens of security personnel in fluorescent vests were present around the expected route for the queue, which was also lined with metal barricades and portable toilets.

The authorities have prepared the public for a very long queue, warning people they would "need to stand for many hours, possibly overnight, with very little opportunity to sit down".

Martin Shanahan, 59, a retired Irishman who has lived in London for three decades, was the 15th person to join the queue. He carried a black waterproof backpack with chicken sandwiches, energy bars and a large bottle of Coke.

"What Her Majesty did for Ireland in the peace process, when she did a state visit to Ireland some years ago, was just incredible ... and as a thank you, I wanted to come here," Shanahan said.

"Having lost my mum just over a year ago, I know that feeling of what King Charles and his siblings are going through."

The event is likely to draw many lifelong royal fans who have closely followed the lives of the family.

James Moore Winston Russell, 45, from north London, who also attended the funerals of Princess Diana and the Queen Mother in 1997 and 2002, likened Queen Elizabeth to being part of his own family.

"I've never had a nan before ... Both my grandparents on both sides all passed away when I was about one or two, and I didn't really know them, so she was like a granny," he said.