Donald Trump and Vladimir Putin also agreed to a "de-escalation agreement" regarding a section of southwestern Syria. Jordan was also part of that agreement. 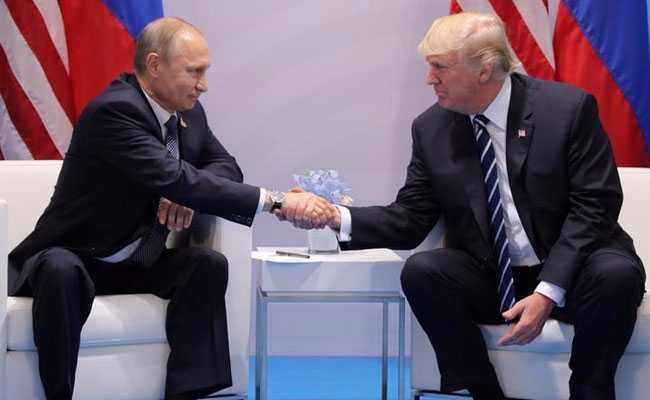 Vladimir Putin and Donald Trump met and held talks during the G20 Summit.

HAMBURG, Germany: President Trump and Russian President Vladimir Putin on Friday discussed brokering "commitments of noninterference" in the U.S. political system during a lengthy face-to-face meeting in Germany, the first in-person encounter between the two leaders about Russia's alleged role in the 2016 election.

Secretary of State Rex Tillerson, who attended the two-hour-and-fifteen-minute meeting, said it did not focus on the United States moving to punish Russia for the allegations that it hacked and leaked information that would help Trump win the election. Instead, Tillerson said the two leaders discussed "how do we move forward" regarding the election-hacking issue.

He said the White House was not "dismissing the issue" but wanted to focus on "how do we secure a commitment" that there will not be interference in the future.

Tillerson's comments came during a briefing with reporters following the highly anticipated meeting between Trump and Putin. He said they also agreed to a "de-escalation agreement" regarding a section of southwestern Syria. Jordan was also part of that agreement.

Syria's lengthy civil war has left more than 400,000 people dead and led to the exodus of hundreds of thousands more.

Past cease-fires in Syria have not lasted long. Tillerson suggested he was skeptical that the cease-fire would endure, saying, "We'll see what happens.
Tillerson said the United States and Russia agreed that working groups set up by both countries would follow up on the political interference issue.

Tillerson would not say whether Trump flatly told Putin that Russia interfered in the election, saying instead: "He pressed him and then felt like at this point, how do we go forward?"

The meeting lasted much longer than expected. At one point, Trump's wife entered the room to try to see if it could wrap up soon, but it continued much longer.

"We went another hour [after] she came in to see us, so clearly she failed," Tillerson said.

Russian Foreign Minister Sergei Lavrov told Russian reporters that Moscow was pleased with the outcome of the meeting.

"My feeling is that it's been confirmed that the presidents, both the Russian and the American, are driven above all by the countries' national interests and that they understand these interests primarily as looking for mutually beneficial agreements and not trying to act out some confrontation scenarios, not trying to create problems out of nothing," Lavrov said.

The world watched closely as the two met on the sidelines of the Group of 20 summit in a meeting whose length far exceeded expectations and suggested that a broad range of topics may have been covered.

"I had a very long conversation with the president of the United States," Putin told reporters after the meeting. "Many issues had accumulated, including Ukraine, Syria and other problems, some bilateral issues. We again went back to counterterrorism and cyber security issues."

The mood was genial as Putin and Trump, sitting side by side, addressed reporters before the meeting.

"We've had some very very good talks. We're going to have a talk now and obviously that will continue," Trump said. "We look forward to a lot of very positive happenings for Russia and for the United States and for everyone concerned."

"I'm delighted to be able to meet you personally," Putin said. "And I hope that, as you have said, our meetings will yield positive results."

Trump and Putin were joined in the meeting by Lavrov and Tillerson. The contrast was clear: the Russian side has decades of diplomatic and leadership experience under its belt, while Trump and Tillerson are political newcomers despite extensive international business ties.

Trump on Thursday once again downplayed the notion that Russia meddled on his behalf in the 2016 election, which would seem to play into one of the Kremlin's main objectives. Any signal from Trump that Moscow and Washington can put aside past differences and forge a new relationship is a victory for Putin.

In two tweets earlier Friday, Trump said he was looking forward to the meeting, and that "I will represent our country well and fight for its interests!"

The Kremlin has said that Putin wants the United States to hand back two compounds that the previous administration seized in late December in retaliation for Russia's actions in the U.S. campaign.

The Trump administration has already indicated it might return those compounds, which the Obama administration said were being used to gather intelligence. But Trump is facing bipartisan opposition at home not to lift sanctions against what many in Washington see as an adversary intent on weakening democratic institutions and diminishing U.S. global leadership.

"The return of these two facilities to Russia while the Kremlin refuses to address its influence campaign against the United States would embolden President Vladimir Putin and invite a dangerous escalation in the Kremlin's destabilizing actions against democracies worldwide," Sens. Jeanne Shaheen, D-N.H., Marco Rubio, R-Fla., and Johnny Isakson, R-Ga., all members of the Senate Foreign Relations Committee, wrote in a letter to Trump on Thursday.

The Senate recently voted 97-2 in favor of a Russian sanctions amendment to the Iran sanctions bill that "would require strict congressional review of any decision to overturn or lift existing policies on Russia, including the return of these two dachas, and would impose new sanctions to deter Russian aggression against the U.S. and its allies."

In a speech in Poland, Trump gave mixed signals on the eve of the summit, urging Russia "to cease its destabilizing activities in Ukraine and elsewhere, and its support for hostile regimes including Syria and Iran."

Kremlin spokesman Dmitry Peskov said in a briefing Friday that Putin had been told about the remarks and that the Russian leader "is taking that into account."

"Let's wait for the results of the meeting," Peskov said. "Let's not got ahead of ourselves."

Along with that note Thursday, Trump also repeated a position shared by Putin, saying that "nobody really knows" who was behind the hacking during the U.S. presidential campaign, and questioning U.S. intelligence agencies' affirmation of Russia's involvement because they were wrong about whether Iraq possessed weapons of mass destruction before the U.S. invasion in 2003.

That both of these statements align with the Kremlin's own stance on the election hacking creates another interesting look for the U.S. president, who once famously wanted Putin to be his "new best friend."

More recently, Trump caused a stir when he met with Lavrov in the White House and shared intelligence on the Islamic State provided to the United States by Israel.

There's also the sense expressed by Russian observers that Putin, the seasoned leader with a clear objective, notoriously well-prepared and ever the operative, will have a notable advantage over a neophyte politician who has so far led the free world in fitful jerks and stops that have left even America's closest allies confused.

And while Peskov this week warned against expecting anything more than a get-to-know-you meeting, Tillerson this week floated a proposal that would expand U.S.-Russian cooperation on Syria.

In advance of the Trump-Putin meeting, Tillerson held an hour-long conversation with Lavrov, the Russian foreign ministry said. "The parties discussed key topics on the international and bilateral agenda," read the ministry's statement.

Peskov on Thursday said Putin would raise Russia's concerns that Ukraine is violating the Minsk peace accords, which call for a cease-fire in the three-year-old war with pro-Russian separatists. U.S. sanctions over Russia's annexation of Crimea were broadened to punish Moscow for backing the separatists militarily, which Putin has denied. Ukraine said a recently captured a soldier it said was working for the Russian military is further proof.

Putin was expected to pressure Trump to back a de-escalation plan for the Korean Peninsula that would have North Korea halt its ballistic missile program and the United States and South Korea call off their large-scale military drills.

Above all, Putin is hoping to forge a relationship that will open the way for dealmaking later on, if and when domestic pressure on Trump over Russian meddling abates, even if it means putting up with Trump's mixed signals.