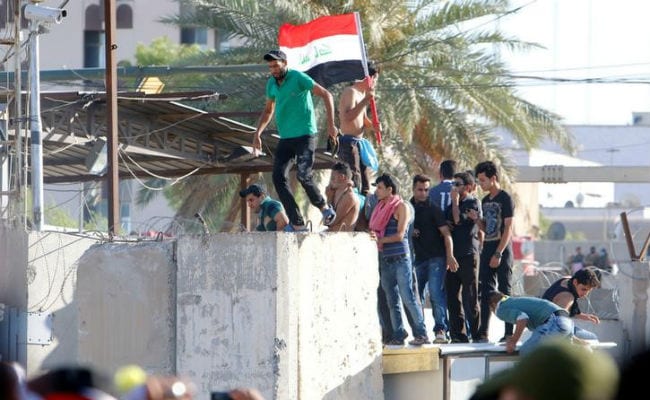 Baghdad, Iraq: Supporters of Iraqi cleric Moqtada al-Sadr stormed the premier's office on Friday after breaking into the Green Zone for the second time in three weeks, further escalating a long-running political crisis.

They faced tough resistance from forces guarding Prime Minister Haider al-Abadi's office but some were able to muscle past and temporarily enter the premises, though demonstrators were later pushed back by tear gas, water cannons, sound bombs and a barrage of live fire directed into the air.

A curfew was announced due to the unrest -- which security and medical officials said wounded at least 58 people, including security personnel -- but was soon lifted.

Sadr followers have been protesting for weeks demanding reforms and a new government, and had warned they would again break into the Green Zone if progress was not made.

The cleric vowed on Friday that "peaceful protests" would continue, warning that "the revolution will take another form" if there are attempts to block them.

Demonstrators were enraged by security measures to keep them out of the Green Zone, which were much tougher than they faced when they broke into the restricted area three weeks earlier.

"We came in a peaceful protest but the cowards began shooting at us," said one protester, displaying handfuls of bullet casings, a white cloth shielding his face from tear gas.

"This is the biggest evidence of their cowardice and corruption," said another protester who held up a canister fired by security forces, a black cloth tied around his face.

Some demonstrators even equated Iraqi politicians with the hated ISIS group, which frequently kills civilians in bomb attacks.

The protesters gathered at Tahrir Square in central Baghdad before crossing Jumhuriyah Bridge over the Tigris River and converging on the Green Zone.

Some were able to force one of the area's gates and then headed to the prime minister's office.

They confronted security forces guarding the compound, and some protesters eventually forced their way in.

Sadr supporters posted pictures of the premier's office on social media, including from the cabinet meeting room, but the protesters later withdrew.

It was unclear where Abadi was at the time of the breach.

While some demonstrators broke through a Green Zone gate located near Iraq's parliament on Friday, a much larger crowd of protesters remained outside.

Security and medical sources said some people were wounded by bullets, but most of the fire was directed into the air, and tear gas accounted for the majority of the injuries.

Protesters managed to hold the gate for some time despite repeatedly being tear gassed, but security forces eventually sallied out, firing automatic weapons into the air and unleashing more tear gas.

They forced the demonstrators back down a street alongside the Green Zone, harrying them with tear gas canisters that hissed into the crowd.

Ambulances became caught in the mass of people packing the street, which was divided by coils of barbed wire running down the median that also impeded movement.

Security forces eventually pushed the demonstrators back across Jumhuriyah Bridge.

Sadr supporters had encountered relatively little resistance when they pulled down slabs of concrete blast walls to break into the Green Zone last month.

But Abadi subsequently sacked the security chief for the Green Zone and beefed up measures around the restricted area.

The latest breach of the area -- which is also home to several embassies, including that of the United States -- could put angry demonstrators on a potentially violent collision course with security forces, and also ups pressure on the premier.

Abadi has proposed replacing the current government of party-affiliated ministers with technocrats, a move resisted by parties that rely on control of ministries for patronage and funds.

Sadr, a Najaf-based cleric who once fought the US-led occupation, has recently cast himself as a champion of the drive against corruption and has also demanded a technocratic government.

Sadr supporters pulled out of the Green Zone on May 1, a day after storming parliament, warning they would return if no political change took place.

But parliament has failed to even reconvene since the incident.

Sadr supporters have also been angered by a deadly series of bombings in Baghdad, with protesters at the site of one attack blaming the government for carrying it out despite it having been claimed by ISIS.