The airport's website showed some delays continuing, in particular for incoming flights. 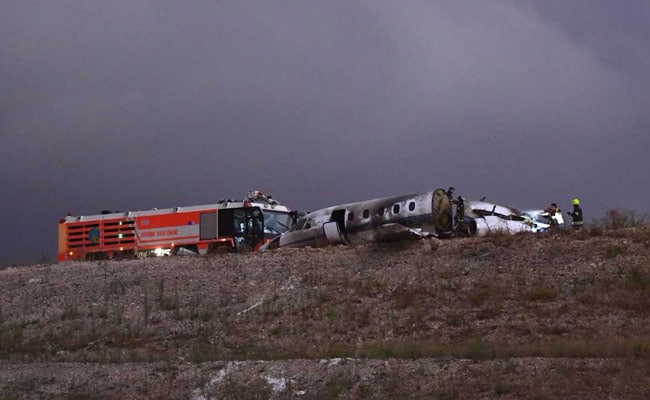 Images showed the stricken wreck of the plane on the airport apron, covered in fire fighting foam

The incident forced the temporary closure of Ataturk International Airport and while it later reopened passengers were still experiencing delays.

Istanbul governor Vasip Sahin said the Cessna Citation plane had two pilots on board, one crew member and one passenger, all Turkish citizens.

"Their condition is good, there were no fatalities and they are undergoing treatment at the hospital," he said, quoted by the state-run Anadolu news agency.

"It has affected flights for a short time but now it has been returning to normal," he added.

Sahin said that the plane sped off the runway and caught fire but its occupants were able to climb out of the aircraft themselves.

The chairman of Turkey's flag carrier Turkish Airlines Bilal Eksi wrote on Twitter that traffic resumed with a single runway in operation and now both were being used.

The airport's website showed some delays continuing, in particular for incoming flights.

The Dogan news agency (DHA) said the plane had taken off from the airport to fly to the breakaway statelet of northern Cyprus, which is only recognised by Turkey.

But it had turned back to land at the airport due to a technical problem where it came off the runway and caught fire.

There were no further details on the cause of the plane's troubles.

Images showed the stricken wreck of the plane on the airport apron, covered in fire fighting foam and apparently split in two.

Other pictures showed a plume of black smoke rising up from the airport.

Ataturk Airport is one of the busiest hubs in Europe, handling up to 1,500 arrivals and departures a day.

Air traffic has grown exponentially in Turkey in the last years and the airport is operating at full capacity.

Promoted
Listen to the latest songs, only on JioSaavn.com
The authorities plan to open a giant new airport for Istanbul next year that will eventually replace Ataturk International.