Large crowds gathered around Holyhead Marina on the island of Anglesey, off the northwest coast of Wales, to greet the royal couple. 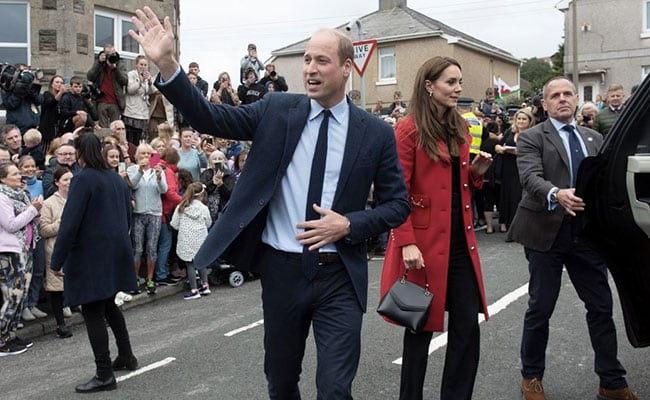 Britain's heir to the throne, William, and his wife, Catherine, on Tuesday made their first visit to Wales since becoming the new Prince and Princess of Wales.

Large crowds gathered around Holyhead Marina on the island of Anglesey, off the northwest coast of Wales, to greet the royal couple.

William inherited the title on the death of his grandmother, Queen Elizabeth II, when his father -- the previous prince of Wales -- became king.

The visit came as media reports said William had no plans for "any kind" of investiture.

King Charles III spent time learning Welsh at university before he was crowned by his mother in a televised ceremony at Caernarfon Castle in July 1969 when he was 20.

During the elaborate investiture ceremony, the queen placed a coronet on Charles's head and helped arrange robes around his shoulders.

He pledged allegiance to his mother with the words: "I, Charles, Prince of Wales, do become your liege man of life and limb."

The domestic Press Association news agency reported that rather than planning an investiture, William was focused on deepening the trust and respect of the people of Wales over time.

His wife Catherine, meanwhile, while conscious of the history associated with the role, wished to create "her own path", a royal source was quoted as saying in the days after the queen's death on September 8.

At the same time, William spoke by telephone with Mark Drakeford, First Minister of Wales and an avowed republican -- a conversation in which the prince mentioned his "deep affection for Wales".

The prince, who previously served as an RAF search and rescue helicopter pilot while living on Anglesey with Catherine, "expressed his and the Princess of Wales's honour in being asked by the king to serve the Welsh people".

King Charles and his wife Camilla, the Queen Consort, visited Wales in the days after his mother's death as part of a tour of the UK home nations.

In a speech to the Welsh parliament, he said William's "love for this corner of the Earth" had been "made all the greater" by the years he had spent there.