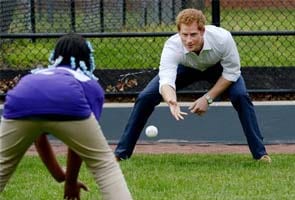 Greenwich: Britain's Prince Harry is wrapping up a weeklong visit to the United States in the affluent New York City suburb of Greenwich, Connecticut, where he is playing in a polo match at a club with a history of hosting royal visitors.

The prince is competing Wednesday at the Greenwich Polo Club to benefit Sentebale, the charity he co-founded to help poor children and AIDS orphans in the small African nation of Lesotho.

Home to many celebrities, Greenwich is hardly unaccustomed to fanfare, but for some the visit of the 28-year-old prince is still a cause for celebration.

At the Atelier360 shop on Greenwich Avenue, co-owner Veronique Lee said the store is planning a party Wednesday with tea and cucumber sandwiches. She noted British designers are well represented at the boutique that sells items including hand bags, flasks and cuff links.

"We like royalty. What can you say?" Lee said. "We're having a lot of fun here."

An invitation-only crowd of about 400 people is expected for the afternoon's match at the polo club, which is inside an exclusive enclave of Greenwich's backcountry, featuring leafy trails and private roads. Greenwich, which is about 30 miles (50 kilometers) from New York, ranks among the wealthiest towns in America with a median household income of close to $100,000.

The polo club, founded by billionaire Peter Brant in 1981, has hosted other British royals including Duke and Duchess of York, Prince Andrew and Sarah Ferguson, in 1987, and Torquhil Campbell, the Scottish Duke of Argyll, in 2012. The guests Wednesday are expected to include top names in the fashion industry including many connected to Stephanie Seymour, the former model who is married to Brant.

Dozens of journalists gathered Wednesday morning at a tent alongside the manicured polo field in advance of the prince's appearance.

Connecticut's governor will not be there. Dannel P. Malloy's office confirms he was not among those invited.

Prince Harry's visit to Greenwich promises a lighter tone than his stop Tuesday in New Jersey, where he toured two shore communities devastated by Superstorm Sandy.

New Jersey Gov. Chris Christie showed the prince a spot in Mantoloking on the Jersey Shore where the sea had cut the town in half, taking out a bridge and houses. The channel has since been filled in. Every one of the wealthy town's 521 homes was damaged or destroyed. Scores remain as piles of rubble.

"This used to be a house?" Prince Harry asked at one barren spot.

The prince said he was impressed to see "everyone getting together and making things right."

Promoted
Listen to the latest songs, only on JioSaavn.com
The prince, who began his visit to the U.S. on May 9, is the son of Prince Charles and Princess Diana and the third in line to the British throne, after his father and older brother, Prince William.