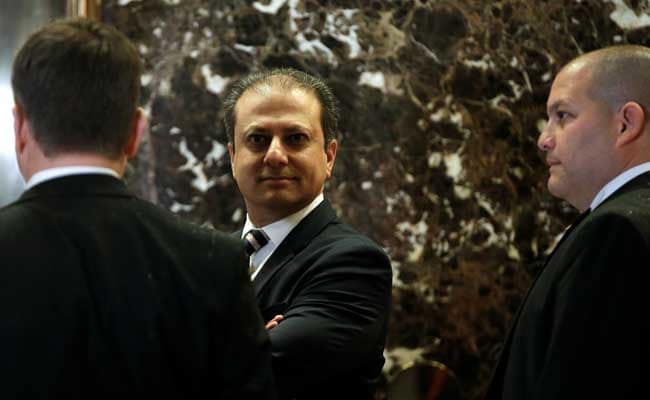 Preet Bharara was the US Attorney for the Southern District of New York. (Reuters Photo)

And staying true to style, the outspoken holdover from the Obama era refused to go quietly when the White House requested his resignation on Friday, forcing the Trump administration to fire him.

The federal attorney's dismissal capped his arm wrestle with the executive branch that started when Bharara -- perhaps the most high-profile US prosecutor in the nation -- flouted the White House order that he along with dozens of other US prosecutors resign.

"I did not resign. Moments ago I was fired," Bharara, 48, tweeted Saturday using his recently created personal account.

I did not resign. Moments ago I was fired. Being the US Attorney in SDNY will forever be the greatest honor of my professional life.

After former US President Barack Obama appointed him in 2009, Bharara had reigned over the high-profile Southern District of New York -- which includes the Manhattan and Bronx boroughs as well as areas just north of the city -- prosecuting corrupt public officials, gang kingpins, cyberhackers and terrorists.

The sapphire-eyed attorney took the helm of the prominent prosecutorial post in the throes of the mortgage crisis, becoming known as "the sheriff of Wall Street" for zealously pursuing white-collar criminals in wealthy Manhattan.

During his more than seven years at the powerful criminal justice perch he also became the scourge of New York lawmakers on both sides of the political aisle, notably taking down on federal corruption charges the former Democratic speaker of New York's assembly as well as the former Republican majority leader of the state Senate.

Born in Punjab to a Sikh father and Hindu mother, Bharara arrived stateside at the age of two. After growing up in New Jersey he graduated from the prestigious Harvard University and later Columbia Law School.

Before Obama appointed him to the post he has held for the better part of a decade, Bharara served as chief counsel to New York Democrat Chuck Schumer, now the Senate Democratic leader, with whom he maintains friendly relations.

It is not uncommon for US presidents to clean house by replacing federal attorneys appointed by the previous administration, but the abruptness and scope of the Trump administration's resignation demands raised eyebrows.

Bharara's ouster came as a particular shock because the attorney had met with Trump shortly after his November election, and had said he agreed to remain in his position at Trump's request -- a seemingly bipartisan move Schumer had lauded.

Bharara's departure comes as his office was set to try former members of New York Democratic Governor Andrew Cuomo's administration for bribery and bid-rigging schemes. It also came amid a high-profile probe into the campaign fundraising efforts of New York City Democratic Mayor Bill de Blasio and his aides.

He is credited in the dismantling of violent Bronx street gangs and New York mafia clans. His triumphs also include recovering a purloined Stradivarius violin and returning stolen fossilized remains of dinosaur skeletons to Mongolia.

In March 2016 he oversaw the shock US arrest of Turkish-Iranian gold mogul Reza Zarrab, who was connected to a 2013 corruption scandal that ensnared the government of then premier, now president, Recep Tayyip Erdogan.

The news of Zarrab's arrest stunned Turkey and boosted Bharara to Twitter fame, as tens of thousands of Turkish admirers followed his account and lavished the federal prosecutor with praise.

"Well, I do love shish kebab but I don't think I can accept gifts just for doing my job..." Bharara tweeted back.
Comments
Preet BhararaDonald TrumpPreet Bharara firing