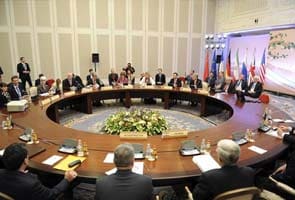 Almaty: World powers and Iran failed again to ease their decade-old dispute over Tehran's disputed nuclear programme in talks that ended on Saturday, prolonging a stand-off that risks spiralling into a new Middle East war.

The lack of a breakthrough in the two-day meeting in Kazakhstan aimed at easing international concern over Iran's contested nuclear activity marked a further setback for diplomatic efforts to resolve the row peacefully.

It is also likely to strengthen suspicions in Israel - which threatens air strikes, if necessary, to stop its arch-enemy from getting the bomb - that Iran is using diplomacy as a stalling tactic.

"It became clear that our positions remain far apart," Ashton, who represents the six powers - the United States, Russia, China, France, Britain and Germany - in dealings with Iran, told a news conference.

Underlining the lack of substantial progress during the negotiations in the Kazakh commercial centre of Almaty - the second meeting there this year - no new talks between the two sides were scheduled.

But a senior U.S. official said there had been no breakdown in the negotiations with Iran.

"There was no breakthrough but also no breakdown," the official, who declined to be identified, said. "Our intention is to proceed," he said, referring to a U.S. commitment to further diplomatic efforts.

"We proposed our plan of action and the other party was not ready and they asked for some time to study the idea," he told a separate news conference.

Russia's negotiator sounded more upbeat, saying the talks were a "step forward" although no compromise had been reached.

"Certainly, these talks were a step forward," Russian Deputy Foreign Minister Sergei Ryabkov said. But he added that it was premature to name a date and venue for further talks.

Iran's critics accuse it of covertly seeking the means to produce nuclear bombs. Israel, widely believed to have the Middle East's only nuclear arsenal, sees Iran's nuclear programme as a potential threat to its existence.

Iran says its nuclear energy programme is entirely peaceful but U.N. inspectors suspect it has worked illicitly on designing a nuclear weapon.

With all sides aware that a breakdown in diplomacy could shunt the protracted stalemate a step closer to war, no one in Almaty was talking about abandoning diplomatic efforts.

Ashton said that for the first time there had been a "real back and forth between us when were able to discuss details, to pose questions, and to get answers directly ... To that extent, that has been a very important element"

But, she added: "What matters in the end is substance."

With a presidential election due in Iran in June, scope for a breakthrough was slim in Almaty. Iran declined to accept or reject an offer of modest relief from economic sanctions in exchange for curbing its most sensitive nuclear activity.

"I do not think the risk of war has substantially increased," said Shashank Joshi, a senior fellow and Middle East specialist at the Royal United Services Institute,

"The priority for both sides is to keep the diplomatic track alive until after the Iranian presidential elections."

But without substantial progress in coming months, Western governments are likely to increase economic sanctions on Iran.

The talks were held against a backdrop of flaring tension between big powers and North Korea, which like Iran is defying international demands to curb its nuclear programme. But unlike North Korea, which has carried out three nuclear tests since 2006, Iran says its nuclear energy activity is entirely peaceful.

The six powers tried to persuade Iran to abandon its higher-grade uranium enrichment, as a first step to a broader deal. Refined uranium can be used to power atomic reactors, Iran's stated aim, or provide material for weapons if processed more.

Iran, which denies seeking nuclear weapons, wants major economic sanctions - including on its oil exports and banks - lifted and its right to enrich uranium publicly recognised.

Promoted
Listen to the latest songs, only on JioSaavn.com
"We regard enrichment as an inalienable right of the Iranian nation," Jalili said.

The six nations, however, say this right only applies when nuclear work is carried out under extensive oversight by U.N. inspectors, something Iran has refused to grant. Since 2006, the U.N. Security Council has demanded that Iran suspend the work.
© Thomson Reuters 2013