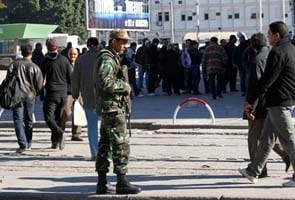 Tunis: Power in Tunisia changed hands for the second time in 24 hours on Saturday morning, and street fighting continued in the aftermath of former President Zine el-Abidine Ben Ali's flight from the country, raising new questions about the shape of the next government here and who might lead it.

The uprising that toppled Mr. Ben Ali continued after his exit with sporadic rioting and gunfire around the capital on Friday night, and there were reports of continuing unrest on Saturday around the country. Soldiers, police officers and young men with guns kept the streets of downtown Tunis under a tight lockdown. Clouds of smoke from the burning and looting of a major supermarket hung over the bleached city skyline. Residents huddled in their homes for fear of the police.

Late in the afternoon, a hail of machine-gun fire broke out in a central square downtown, clouds of tear gas rose and masked snipers were visible on the roof of the Interior Ministry along Bourguiba Boulevard taking aim at pedestrians below.

Bowing to the continuing unrest, which has already claimed dozens of lives, the prime minister who had announced just a day before that he was taking power, abruptly gave it up on Saturday morning. Complying with the rules of succession spelled out in the Tunisian Constitution, the prime minister turned over authority to the speaker of the Tunisian Parliament, who is expected to hold elections to form a new government within 60 days.

But the swift turnover also underscored the power vacuum here after Mr. Ben Ali's hasty departure. During his 23 years of autocratic, one-party rule, he effectively eliminated or co-opted every political institution or opposition leader in the country. Even the military, widely believed to have played the pivotal role in ushering Mr. Ben Ali out the door, is much weaker than in any other country in the region.

Some analysts argue that the power vacuum -- along with the Tunisia's educated, secular, middle-class population -- makes Tunisia a plausible candidate to host the first democratic government in the region. But Tunisia has no record of clean elections, and the absence of political counterweights also raises considerable uncertainty about the way forward.

"There are very few players to keep track of," said Michael Koplow, who has written on Tunisia for Foreign Policy magazine. "If there were new free elections, it is unclear whether there is anyone qualified to run who the people would accept. It is wide open."

Nor is there any leader or spokesman for the four-week-old protest movement that forced Mr. Ben Ali from power.

The protests sprung into being abruptly after the self-immolation last month of a college-educated street vendor in the remote town of Sidi Bouzid who was frustrated by the lack of good job prospects. It grew from grass roots through social networks like Facebook and Twitter, fanned by aggressive coverage from Al Jazeera. And it accelerated as demonstrators circulated homemade digital videos of each protest or confrontation, beginning with the vendor's self-immolation, to inspire new ones around the country.

"There are no leaders, that is the good thing," one protester said Friday amid the thousands of demonstrators who gathered outside the Interior Ministry, just a short while before the police imposed martial law and Mr. Ben Ali fled the country.

The events surrounding Mr. Ben Ali's exit illustrate the vacuum. There were unconfirmed reports that on Thursday his top military official, Gen. Rachid Ammar, refused to shoot protesters. That afternoon, the military began pulling its tanks and personnel out of downtown Tunis, leaving the police and other security forces loyal to the ruling party to take their place.

Many analysts believe that it was General Ammar, perhaps using the threat of military force, who ultimately convinced Mr. Ben Ali that the time had come to leave. These analysts argue in part that there was no other person or institution capable of forcing the longtime ruler to leave.

But the Tunisian military is relatively small, and, so far, neither General Ammar nor any other military figure has stepped forward to try to claim power.

Instead, the announcement of an interim presidency came from the prime minister, Mohamed Ghannouchi, 69, a close ally of Mr. Ben Ali who came from the same hometown of Sousse as the former president. The prime minister's claim to power violated the Constitution, and he immediately became a target of the same wave of popular anger that brought down Mr. Ben Ali. By late Friday night, Facebook pages that had provided a central forum for the revolt had replaced their slogan "Ben Ali, Out" with a new one: "Ghannouchi, out!"

Some Tunisians on Saturday morning attributed the continued rioting overnight to anger over what they called Mr. Ghannouchi's "coup," but in the chaos around the capital it was becoming hard to distinguish protests from looting.

But the speaker, Fouad Mebazaa, 77, who has taken charge presides over a Parliament dominated almost entirely by Mr. Ben Ali's ruling party. He, too, owes his career to the former president. It was not clear whether Saturday's handover did much to calm the situation.

On Facebook, there were already hints that General Ammar could become a political force. As of Saturday afternoon, 1,680 people had clicked that they "like" a Web page emblazoned with his official photographs titled "General Rachid Ammar President."

Meanwhile, Saudi Arabian television reported that Mr. Ben Ali had landed in Jidda. The French government, anxious to avoid unrest with its own large Tunisian population, had made it clear he was not welcome. But the French media reported that other members of his family had taken refuge at a Disneyland hotel there even before the abdication. The Arab media reported that the president's billionaire son-in-law was in Dubai, United Arab Emirates.

Bedlam continued around the country. Tunisia's official news agency reported that a fire at a prison in the Mediterranean coastal resort of Monastir had killed 42 people.

Still, inside Tunis, some were optimistic. Huddled in the doorway of a darkened apartment building downtown, a man in his late 20s was smoking cigarettes and watching the security forces patrol the square outside. He would give only his first name, Faisal, and he said he had been unemployed for the seven years since he graduated from college, in part because he could not afford the bribes necessary to secure a job.

He had nothing good to say about Mr. Ben Ali, but when asked about what would come out of the chaos, he shrugged and smiled.

"Look," he said, "Everything is going to be O.K."
Comments
TunisiaZine el-Abidine Ben AliTunisia govt