He told his aide to push his wheelchair between the cars of a waiting police motorcade and close to fencing. 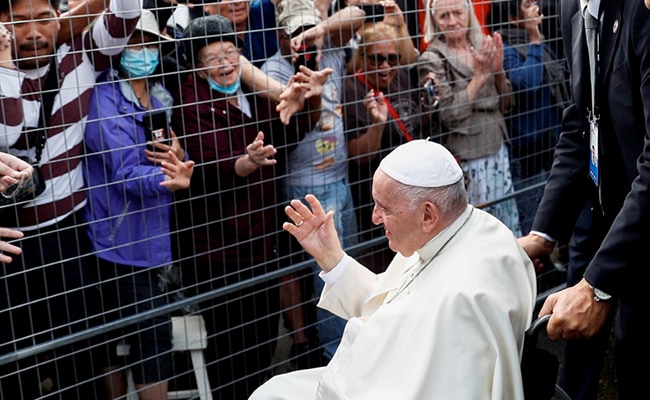 Pope Francis had some fun on Monday and made Canadian security sweat when he asked a Vatican aide to push his wheelchair close to people waiting outside a church instead of going to his car as planned.

Pope Francis had just finished a visit to the Sacred Heart Church of the First Peoples in Edmonton, the capital of Alberta, which followed a trip to Maskwacis, where he issued a historic apology for Catholicism's role in the country's notorious residential school system.

Leaving the small church, he noted that many people who could not get inside were pressed behind temporary wire fencing.

He told his aide to push his wheelchair between the cars of a waiting police motorcade and close to fencing.

Pope Francis, 85, is using a wheelchair occasionally during the visit because of a knee problem.

At one point, his aide had to lower the wheelchair backwards to manoeuvre it from the pavement to the street, putting it - and the white-robed pope - at a 45 degree angle pointing skyward.

As he was being pushed slowly past the crowd, he seemed to be openly enjoying the moment.

People behind the fences were ecstatic, putting their fingers through the wiring in hopes of touching him. Some shouted "thank you for coming to see us".

The security detail, who were also trying to control a group of reporters and photographers inside the fencing, were relieved when the pope was pushed towards his waiting car, a simple white Fiat 500, and helped into the front passenger seat.