Benedict XVI was the first pope to retire in 700 years -- citing his diminishing strength -- after eight years in office. 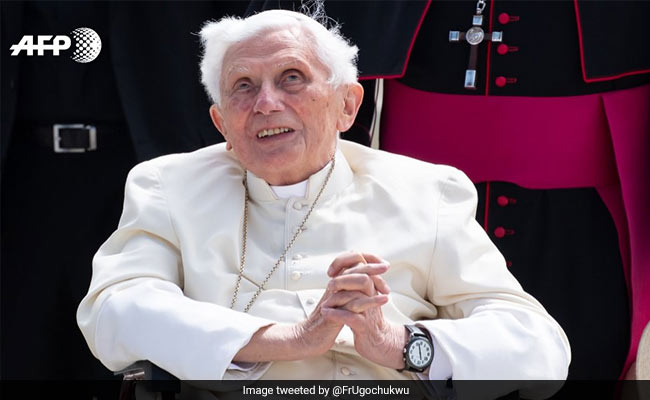 Benedict XVI officially became the oldest pope in history at the age of 93 and nearly five months.

At the age of 93 and nearly five months, Benedict XVI officially became the oldest pope in history on Friday, even if the record is complicated by the fact that he stepped down in 2013 and holds the status of "pope emeritus".

Benedict was the first pope to retire in 700 years -- citing his diminishing strength -- after eight years in office.

He was succeeded by Argentinian Jorge Bergoglio, 10 years his junior and who adopted the name Francis.

Born on April 16, 1927, Benedict -- whose civilian name is Josef Ratzinger -- officially broke the previous longevity record held by Italian Leo XIII who died in 1903 at the age of 93 years, four months and three days, according to the calculations of the Italian episcopal journal, Avvenire, and the magazine Famiglia Cristiana.

"34,111 days in the service of God, the world and the ecclesiastical community," wrote Famiglia Cristiana, referring to Benedict.

Aside from Benedict's retired status, Vatican experts say the record could also be disputed because, going back 1,400 years, the ages of previous popes may not always be completely accurate.

The previous record holder, Leo XIII, is known for having written the first encyclical on social problems.

Unlike Benedict's relatively short reign as pontiff, the Italian aristocrat led the church for more than 25 years. By comparison, Pius XI was pope for 31 years and John Paul II for 26 years.

Benedict lives "hidden from the world" in a former convent inside the Vatican grounds.

Often in a wheelchair, he has appeared increasingly frail recently.

But the author of dozens of books, who was nicknamed "God's Rottweiler" as a cardinal, is still mentally sharp, according to people close to him.

Despite his limited mobility, Benedict travelled to his native Bavaria in June to the bedside of his 96-year-old brother, Georg.

The two were very close and Georg died on July 1. Both had been ordained priests on the same day, in June 1951.

On that visit, his first foreign trip since stepping down, Benedict started suffering a painful case of shingles affecting the face, which worsened after the death of his brother.

His private secretary, Georg Gaenswein told a German newspaper last month that the shingles were clearing up, although no official statement has since been issued about Benedict's health.

Shingles are "a very painful disease, but not deadly," Gaenswein said, adding that the former pope had suffered "pain that I wouldn't wish on my worst enemy".

The virus that causes the rash is the same herpes zoster behind chickenpox, and can reactivate after long periods spent dormant.

Benedict's German biographer, journalist Peter Seewald, had raised the alarm about the former pope's health after meeting him on August 1 to hand over his latest book.

"According to Seewald, the pope emeritus is now extremely frail," the Passauer Neue Presse newspaper wrote at the time.

Benedict has lived with a pacemaker since 1997, while a brain haemorrhage in 1991 left him blind in his left eye.

The former theology professor, who taught for 25 years before being appointed Archbishop of Munich, went on to become the man in charge of preserving Catholic doctrine by defending points of Christian tradition which seem to be in danger.

On the death of John Paul II in 2005, Cardinal Joseph Ratzinger was elected the 265th pontiff, becoming Benedict XVI.