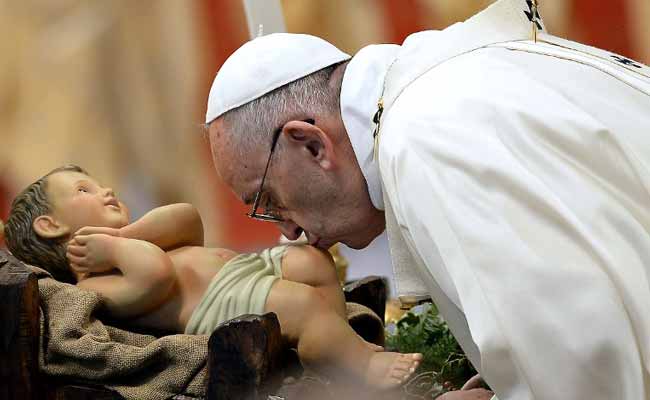 Pope Francis kisses the statue of baby Jesus as he arrives in St Peter's Basilica at the Vatican to celebrate the holy Mass for the families today. (AFP Photo)

"My thoughts at this moment go out to the numerous Cuban migrants who find themselves in difficulty in Central America and some of whom are victims of human trafficking," he said during Angelus prayers.

"I invite all the countries in the region to generously redouble all efforts needed to quickly find a solution to this humanitarian drama," he said.

Thousands of Cubans have been stuck in Panama, Costa Rica and Nicaragua when Costa Rica last month dismantled a people-smuggling ring and Nicaragua, a Cuban ally, closed its border to them.

The Nicaraguan move has forced Costa Rica to make increasingly desperate pleas to other Central American nations to take the Cubans in to allow them to continue their journey to the US.

The United States has a decades-old policy of accepting Cubans if they set foot on its soil.

The number of Cubans trying to flee their island for a new life in the United States jumped this year. Many fear that a thaw in US-Cuban relations announced a year ago will end the American policy of automatically accepting them as refugees.