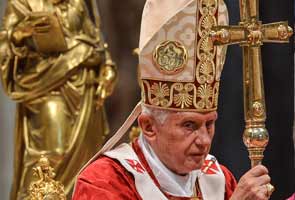 Vatican City: Pope Benedict XVI on Wednesday congratulated Barack Obama on his re-election and asked him to defend the values of freedom and justice that guided the founders of the United States.

The pope said that he would pray that "the ideals of freedom and justice that guided the founders of the United States of America continue to illuminate the path of this nation," Vatican spokesman Federico Lombardi told reporters.

The message was relayed through the Vatican's envoy to Washington.

He also said he hoped that God would guide Obama to deal with "his very serious responsibilities to his country and  to the international community".

Lombardi said the pope wanted to emphasise the need for Obama to respect fundamental human and spiritual values and promote "the culture of life and religious freedom" -- a reference to the hot-button issue of abortion rights.

Some US Catholic bishops have been critical of the Obama administration after a healthcare reform that included insurance provision for contraception.

Polls show that while Catholic voters were mostly favourable towards Obama four years ago, they have been more divided this campaign season.