Around 100 million people are eligible to vote in the election in the world's third-largest economy. 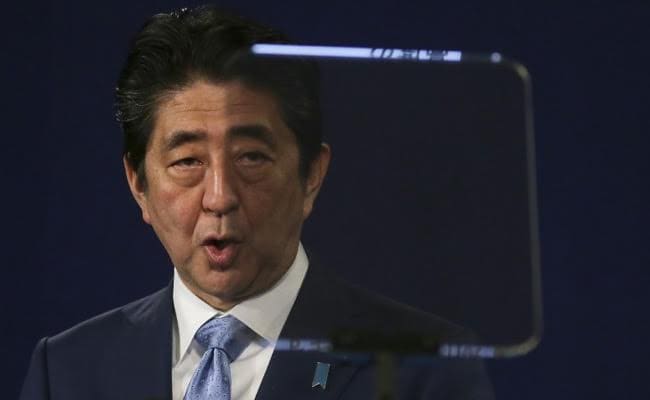 If pre-election surveys are correct, Abe's conservative coalition will cruise to a crushing majority to win a fresh term at the helm of the key US regional ally and Asian economic powerhouse.

Polling stations opened across the country at 7:00am (2200 GMT Saturday) with voters battling high winds and driving rain as an election-day typhoon barrelled towards Japan that could weigh on turnout.

The near-constant drizzle throughout the campaign has not dampened the enthusiasm of hundreds of doughty, sash-wearing parliamentary hopefuls, who have driven around in campaign minibuses pleading for votes via loudspeaker and bowing deeply to every potential voter.

Abe shocked Japan by calling the snap election a year earlier than expected, urging voters to stick with him in the face of what he termed the dual "national crises" of an ageing population and North Korean tensions.

Pyongyang has cast a menacing shadow over the short 12-day campaign, after it lobbed two missiles over the northern island of Hokkaido and threatened to "sink" Japan into the sea.

Nationalist Abe has taken a hawkish line during the crisis, binding Japan to the US stance that "all options" are on the table to counter Pyongyang's nuclear threat and urging maximum pressure via sanctions.

"When North Korea is purposefully threatening us and increasing tension, we must not waver," an animated Abe stressed at his final campaign rally.

"We must not yield to the threat of North Korea."

Observers say North Korea's sabre-rattling has helped Abe, as voters tend to plump for the incumbent at times of heightened tension.

"Factors such as uncertainty over North Korea are likely to drive voters towards the current government, which is seen as the conservative choice," noted Katsunori Kitakura, an analyst at SuMi Trust financial consultants.

Despite a clear lead in the polls, Abe enjoys only lukewarm support in the country and critics say he called the election to divert attention from a series of scandals that dented his popularity.

But he faces a weak and fractured opposition in the shape of two parties that have only existed for a few weeks, the Party of Hope created by Tokyo Governor Yuriko Koike and the centre-left Constitutional Democratic Party.

Koike, 65, threatened to shake up Japan's sleepy landscape with her new party, vowing to do away with old-school politics and vested interests.

Her new party sparked the implosion of the former main opposition party as dozens of lawmakers left to hitch their colours to Koike's mast.

But after days of wall-to-wall media coverage for the former TV presenter, the bubble burst and Koike's popularity ratings plunged, mainly because she declined to run herself in the election.

"As it turned out, the Party of Hope is hopeless," said Michael Cucek from Temple University.

Koike herself will not even be in Japan on election day, choosing to visit Paris for an event in her capacity as Tokyo Governor.

The Constitutional Democratic Party, made up of centre-left lawmakers not running with Koike, may benefit from her decline and carries some momentum into the vote.

But with little doubt over the eventual result, the suspense lies in whether Abe's coalition will retain its two-thirds majority in the lower house.

This is significant because it allows Abe to propose changes to Japan's US-imposed constitution that forces it to renounce war and effectively limits its military to a self-defence role.

Despite the threat from North Korea, many voters feel the economy is a more pressing issue, as the prime minister's trademark "Abenomics" policy has had limited success in returning Japan to its former glories.

While the stock market is enjoying its longest run of gains in half a century and stands at a 21-year high, the benefits have been slow to trickle down to the general public.

Abe has vowed to use part of the proceeds from a proposed sales tax hike to provide free childcare in a bid to get more women working but Koike wants to scrap the tax hike altogether.

(This story has not been edited by NDTV staff and is auto-generated from a syndicated feed.)
Comments
Shinzo AbeJapan elections