Pluto Gets A Buddy: A New Dwarf Planet Is Discovered In Our Solar System 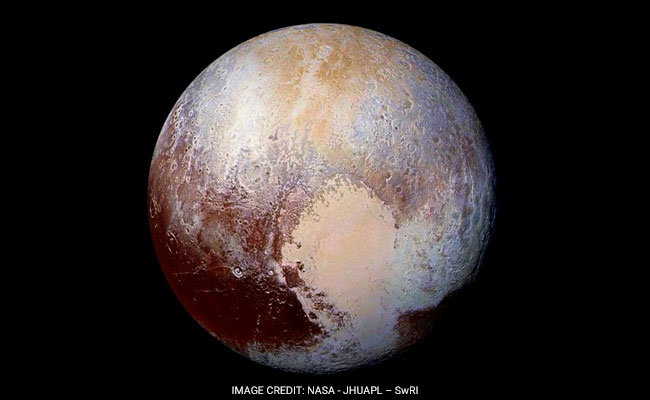 An exaggerated color photo shows the varied terrain of Pluto, the most well-known dwarf planet.

Out beyond Neptune, past Pluto, through the chaos of the Kuiper belt to a point some 8.5 billion miles from the sun, a new dwarf planet has just joined our solar system.

The Iowa-sized object, which is about half as big as Pluto and twice as distant, was described Tuesday in the International Astronomical Union's Minor Planet Electronic Circulator. It joins a growing list of dwarf planets known to populate the solar system: Ceres, Haumea, Makemake, Eris and - most famous of all - Pluto. It's suspected there could be at least 100 more.

The "trans-Neptunian object," known for now as 2014 UZ224, was discovered by University of Michigan astrophysicist David Gerdes and a team of undergraduate researchers.

Gerdes is part of an international team of scientists working on the Dark Energy Survey - an effort to map the universe and elucidate some of its mysteries, particularly, why the expansion of the universe is accelerating. To do a dark energy survey, you need a dark energy camera, so the DES built a wide-angle camera in Cerro Tololo, Chile, that's capable of snapping images of the whole sky.

A few years ago, Gerdes told NPR, some undergrads were visiting Cerro Tololo, and he wanted to give them a challenge. He handed them one of the camera's maps of the entire galaxy and asked whether they could pinpoint which objects were in our own solar system.

The secret was to identify the ones that moved. Viewed against the vast backdrop of the Milky Way, close-by planets and other bodies appear to move more quickly in relation to everything else.

Gerdes figured that the students would trace the objects across the night sky and identify the orbits of some known objects in our
solar system.

Instead, the students came to Gerdes with something astronomers hadn't seen before.

It took two years of careful tracking to confirm the discovery and map out 2014 UZ224's orbit. Its exact path is still unclear, because the planet takes more than 1,000 years to complete a single loop of the sun. But it's believed that 2014 UZ224 is the third most-distant object in the solar system.

Gerdes told NPR that it's possible some astronomers might dispute 2014 UZ224's dwarf planet designation. The distant body is pretty small, even for a dwarf planet.

But the term applies for now. Meanwhile, he and his colleagues are on to (literally) bigger things: looking for the mysterious Planet Nine, whose existence was speculated about in the Astronomical Journal earlier this year.

(This story has not been edited by NDTV staff and is auto-generated from a syndicated feed.)
Comments
Plutonew dwarf planetSolar SystemKuiper belttrans-Neptunian object