She Enjoyed The Moment, Says Official Amid Outrage Over Duterte's Kiss

The President was in South Korea on an official visit where he kissed a Filipino woman on the lips in exchange of the book he was handing out. 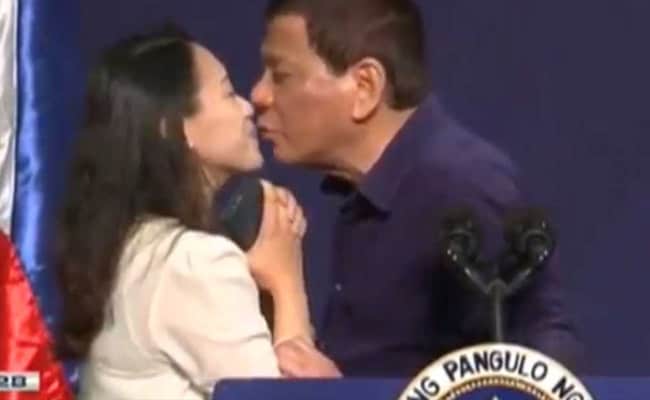 Manila: Philippine President Rodrigo Duterte has defended his kiss on the lips of a married Filipino woman in South Korea, and said he will resign if enough women are offended and sign a petition calling for him to step down.

Duterte has described Sunday's kiss as "pure showbiz" intended to entertain a crowd of Filipino expatriates. Feminists called it his "perverted way" of taunting female critics who are angered by frequent derogatory comments, some of a sexual nature.

"If there are enough women to ... Well I think if all women here would sign a petition for me to resign, I will resign," Duterte told a media briefing around midnight on Tuesday upon his return from an official visit to South Korea.

Social media was abuzz with photos and videos of Duterte on stage asking an unidentified woman from an audience of Filipinos to kiss him in exchange for a book he was handing out. The woman, who appeared excited to see Duterte in person, agreed.

Duterte enjoys a rock star status among Filipinos and has a cult-like following among those living overseas. He said kissing women was his "style" during his 22 years as a mayor in Davao City prior to becoming president.

"During the campaign in my mayorship days, I kiss every woman there, lips to lips", the 73-year old Duterte said.

"The problem is you don't know me."

Duterte's controversial remarks about women include several public jokes about rape. But none have dented his domestic support and many Filipinos view his politically incorrect, earthy language as part of his appeal.

Women's rights advocates in the Philippines recently launched an online #BabaeAko (I Am A Woman) campaign to send a message that they were not taking Duterte's "sexist" statements sitting down.

"She did it willingly and excitedly, she was tickled pink," he told news channel ANC.

Promoted
Listen to the latest songs, only on JioSaavn.com
(Reporting by Karen Lema; Editing by Martin Petty and Michael Perry)
© Thomson Reuters 2018