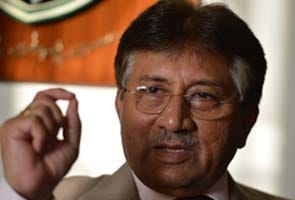 Dubai: Pakistan's former military ruler Pervez Musharraf said Friday he would definitely return home Sunday to contest historic elections in May and that he was prepared to risk any danger to his life.

He gave an interview with AFP in Dubai just hours after a Pakistani court granted him protective bail in a string of legal cases, paving the way for his return from nearly five years in exile without the risk of immediate arrest.

He is wanted in Pakistan over the assassination of former prime minister Benazir Bhutto in a gun and suicide attack after an election rally in Rawalpindi, the headquarters of the army, on December 27, 2007.

Commentators say most of his powerbase has evaporated and that he will only be able to secure at the most a couple of seats for his All Pakistan Muslim League (APLM) party in the next national assembly.

"Two hundred percent! I am travelling back on Sunday to Pakistan," he told AFP in Dubai, where he has divided his time with London.

"I will go by land, air or sea... even to the peril of my life this is the oath I took for the country."

Musharraf seized power in a bloodless military coup when he was army chief of staff in 1999 and left the country after stepping down in August 2008, when Bhutto's widower, Asif Ali Zardari, was elected president.

The outgoing government led by Bhutto's Pakistan People's Party (PPP) always insisted that Musharraf would be arrested should be return to the country and last year he delayed a planned homecoming after being threatened with detention.

Commentators believe that an interim government, set to guide the country during the election campaign, should be in place by Sunday.

"There will be no arrest or anything," Musharraf told AFP. "I decided I will go back whatever the judgment (in court) but the judgment is favourable," he said.

But political analysts said Musharraf would be disappointed if he thought he was capable of returning to power.

"He has no political future," Hasan Askari told AFP.

"He thinks that people are so annoyed by the outgoing government that they will join his party and support him, but it won't happen."

"After an initial show in the media upon his arrival in Karachi, he will have nothing else to do. He has no future," he told AFP.

"I think he will have good time with his buddies, play golf and drink together with them in the future but he won't have any political activity."

To preclude the prospect of his arrest on arrival, his daughter, Ayla Raza, petitioned a court in Karachi on his behalf for protective bail in three cases, including the 2007 assassination of Bhutto.

"He has full protection now and he cannot be arrested in these cases upon his arrival in Pakistan," Salman Safdar, one of Musharraf's lawyers, told AFP.

Bhutto's son, Bilawal Bhutto, who is co-chairman of the PPP with Zardari, has accused Musharraf of murdering his mother.

Promoted
Listen to the latest songs, only on JioSaavn.com
In 2010, a UN report said the murder could have been prevented and accused Musharraf's government of failing to provide Bhutto with adequate protection.

Musharraf's government blamed the assassination on Pakistani Taliban chief Baitullah Mehsud, who was killed in a US drone attack in August 2009.
Comments
Pervez Musharraf