The ceremony came shortly after lawmakers voted to accept the resignation of his former boss Kuczynski, rather than push ahead with impeaching him over corruption allegations. 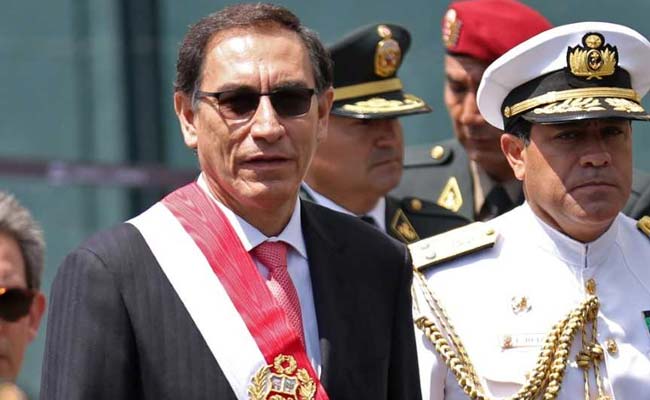 Vizcarra was both vice president as well as his country's ambassador to Canada. (AFP)

Vizcarra, who was both vice president as well as his country's ambassador to Canada, took the oath of office and donned the red-and-white presidential sash before the Peruvian Congress.

The ceremony came shortly after lawmakers voted to accept the resignation of his former boss Kuczynski, rather than push ahead with impeaching him over corruption allegations.

"We will stand firm in the fight against corruption. Transparency will be a pillar of our administration," Vizcarra, a former cabinet minister known for his meticulous management and unflashy style, said in his first address as president.

Just a day before, the engineer and technocrat was far removed from the political hornet's nest that brought down Kuczynski, leading the relatively placid life as the head of the Peruvian mission in Ottawa.

He flew home Thursday night, on his 55th birthday, and now takes over the remainder of Kuczynski's term, until 2021 -- though early elections are still a possibility.

Kuczynski, 79, had a strikingly short tenure as president: the former Wall Street banker was elected by a razor-thin margin in June 2016, and took office the following month.

But he lacked a majority in Congress, and was almost immediately embroiled in a messy conflict with the main opposition party, Popular Force, led by Keiko Fujimori, the daughter of disgraced ex-president Alberto Fujimori.

Odebrecht revealed in December that it had paid nearly $5 million to consulting companies linked to Kuczynski when he was finance minister.

The former president survived a first impeachment vote that month. Three days later, he granted a pardon on medical grounds to former president Fujimori, who had been in jail for corruption and human rights violations.

That sparked speculation of a back-room deal with an opposition faction led by Keiko Fujimori's brother and sometime rival Kenji.

When video tapes emerged of Kenji, who has now split from his sister's party, apparently offering bribes to a fellow lawmaker to vote against the December impeachment, the political damage to Kuczynski proved to be too much.

Facing a new impeachment vote, he announced his resignation Wednesday, proclaiming his innocence but saying it was for the good of the country.

Vizcarra inherits a country still reeling from the drama and deeply mistrustful of its politicians, just as its strong economy is slowing.

Like Kuczynski, he will face an opposition-controlled Congress, though he may benefit from the fact that he has no connection to traditional political parties.

Keiko Fujimori appears willing to declare a truce -- at least for now.

"This is a moment to stand united as Peruvians, strong and optimistic in the face of the challenges that await us," she wrote on Twitter.

Vizcarra will almost immediately be thrust onto the international stage when Peru hosts the Summit of the Americas from April 13 to 14 -- an event the foreign ministry confirmed was still on.

Earlier Friday, Kuczynski had threatened to withdraw his resignation, saying on Twitter he would rather be impeached and have a trial at which he would have a chance to defend himself.

Ironically, the situation echoed what happened to Alberto Fujimori himself in 2000, at the end of his decade-long run as Peru's president.

Fujimori had resigned the presidency by fax -- sent from exile in a hotel room in Japan -- but Congress rejected the resignation, choosing instead to punish the ex-strongman.

Promoted
Listen to the latest songs, only on JioSaavn.com
By resigning on the eve of the new impeachment vote, Kuczynski was hoping to avoid the same fate.

(Except for the headline, this story has not been edited by NDTV staff and is published from a syndicated feed.)
Comments
Martin VizcarraPeru President