Pentagon Papers: The 'WikiLeaks' of 40 years ago 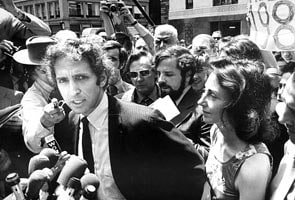 New York: It may be a first in the annals of government secrecy: Declassifying documents to mark the anniversary of their leak to the press. But that is what will happen Monday, when the federal government plans to finally release the secret government study of the Vietnam War known as the Pentagon Papers 40 years after it was first published by The New York Times.

At first blush, it sounds like the release of one of the worst-kept secrets in history -- finally unlocking the barn door four decades after the horses bolted. The study, after all, has already been published by The Times and other newspapers, resulting in a landmark First Amendment decision by the Supreme Court. It has been released in book form more than once. But it turns out that those texts have been incomplete: When all 7,000 pages are released Monday, officials say, the study can finally be read in its original form.

That it took until the era of WikiLeaks for the government to declassify the Pentagon Papers struck some participants as, to say the least, curious.

"It's absurd," said Daniel Ellsberg, the former RAND Corporation analyst who worked on the report and later provided it to The Times. He said Tuesday that the report should not have been secret even in 1971, when newspapers first published it, adding: "The reasons are very clearly domestic political reasons, not national security at all. The reasons for the prolonged secrecy are to conceal the fact that so much of the policy making doesn't bear public examination. It's embarrassing, or even incriminating."

When Mr. Ellsberg first leaked the study, he had to take it volume by volume out of a safe in his office and ferry it to a small advertising company owned by the girlfriend of a colleague who had Xerox machine. Page by page, they copied it in all-night sessions. Now the National Archives and Records Administration will scan it and -- behold -- it will be online quickly.

Leslie H. Gelb, the president emeritus of the Council on Foreign Relations, who was the director of the task force that wrote the report, said he was surprised it had remained officially classified all these years, after so much of it had been made public. "It should have been declassified a long, long time ago," he said.

But the secrecy has persisted. Timothy Naftali, the director of the Richard Nixon Presidential Library and Museum, said that when he recently put together an exhibit on Watergate, he wanted to display just the blue cover of the Pentagon Papers report. "I was told that the cover was classified," he said, adding that he was astounded.

There is intrigue even in the release itself. Archivists touched off a new round of feverish speculation when they originally announced that 11 never-before-published words of the 7,000-page report would remain redacted all these years later, only to reverse themselves and announce Tuesday that the 11 words would be published after all.

So what were the mysterious 11 words?

Archivists originally joked that they would hold a Mad Libs contest, to see who could guess them. But even though the 11 words will be published after all, they have not said what they were -- sparking a bit of a guessing game. Thomas S. Blanton, the director of the National Security Archive at George Washington University, said he guessed the words had something to do with intelligence capabilities, or references to people who are still alive who had been sources, or North Vietnamese diplomats.

"The criticism of their redacting the 11 words in the first place is that it's self-defeating," Mr. Blanton said. "You're just flagging them for everyone to identify what they are."

The bigger question is what new material will be made public for the first time. Several archivists who have seen the complete report declined invitations to repeat history and leak the full version of the Pentagon Papers to The Times. But there are some indications of what will be in it.

Until now, the complete text of the report -- officially known as the Report of the O.S.D. Vietnam Task Force -- has been as elusive to researchers as a clean copy of Hamlet has been to generations of Shakespeare scholars. The version Mr. Ellsberg provided to the press was incomplete. A book published by Beacon Press, based on a copy from Senator Mike Gravel, Democrat of Alaska, had missing sections. And a version published by the government was heavily redacted.

When Mr. Ellsberg originally leaked the Pentagon Papers, he did so because he wanted to stop the Vietnam War -- so he left out sections about peace negotiations with North Vietnam. "I omitted them because I thought that Nixon would use the release as an excuse for breaking off negotiations with North Vietnam," he said in an interview. "I frankly didn't want to give him that excuse."

Those sections about the negotiations had been declassified for years. But they will now appear in the context in which they were first written, along with several volumes that have not been published, including a section on the United States training the Vietnamese national army, a statistical survey of the war from 1965 to 1967 and some supporting documents.

Mr. Gelb said he thought the depth of the reports had been exaggerated over time, and noted that his team was extremely limited in what it was able to draw on to produce them.

"They are almost catch-as-catch-can studies based on available documents," he said. "This thing was not meant to be in any sense a definitive history, or even a definitive bureaucratic history. It was just a history put together by very smart guys on the run."

But Mr. Ellsberg said there were still plenty of lessons to be drawn.

"The re-release of the Pentagon Papers is very timely, if anyone were to read it," he said.

He said they demonstrate the wisdom of giving war-making powers to Congress -- a power that he lamented has been increasingly usurped by the executive branch.

"It seems to me that what the Pentagon Papers really demonstrated 40 years ago was the price of that practice," he said. "Which is that letting a small group of men in secret in the executive branch make these decisions -- initiate them secretly, carry them out secretly and manipulate Congress, and lie to Congress and the public as to why they're doing it and what they're doing -- is a recipe for, a guarantee of Vietnams and Iraqs and Libyas, and in general foolish, reckless, dangerous policies."

Mr. Ellsberg said he wished more people would come forward to release information that could stop these wars, praising Pfc. Bradley E. Manning, the military intelligence analyst who is jailed on charges that he leaked a trove of government files to Wikileaks.

Promoted
Listen to the latest songs, only on JioSaavn.com
"If he did what he's accused of, then he's my hero, because I've been waiting for somebody to do that for 40 years," Mr. Ellsberg said. "And no one has."