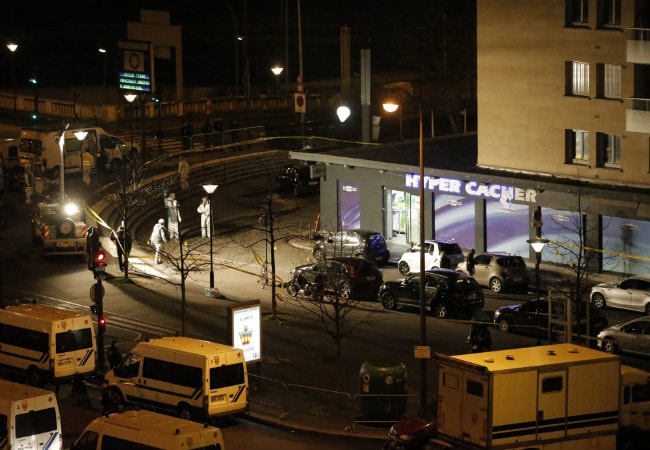 Paris: The four people killed Friday at a Jewish supermarket in Paris were "likely" killed by the gunman at the start of the hostage-taking, the prosecutor leading the investigation said. (French End Two Sieges, Killing Massacre Suspects and An Ally)

Pointing to the "state of the bodies" and gunman Amedy Coulibaly's own remarks in a phone interview with French television from the scene, prosecutor Francois Molins said it seemed "no hostage was killed during the assault" by police that ended the siege.

Coulibaly had threatened to kill the remaining hostages if police raided a business in the town of Dammartin-en-Goele where two brothers behind Wednesday's massacre at Charlie Hebdo magazine had also holed up and took a hostage, Molins said.

The 32-year-old militant, who was killed by police, said he had booby-trapped the kosher store in eastern Paris, Molins said. ('I Shook His Hand': French Salesman on Run-In with Massacre Suspect)

Coulibaly, who had shot dead a policewoman south of Paris on Thursday, told BFMTV he was acting on behalf of the Islamic State jihadist group.

He also confirmed he had coordinated his attacks with the brothers Cherif and Said Kouachi who killed 12 people at Charlie Hebdo's offices Wednesday, in France's deadliest terrorist attack in decades which brought tens of thousands of people onto the streets in protest.

Friday's deaths brought the death toll in the three days of violence to 17. The Kouachi brothers were also killed as they charged at police surrounding them in Dammartin-en-Goele with their guns blazing.

Five people were still being held Friday night over the attacks, Molins said.

Promoted
Listen to the latest songs, only on JioSaavn.com
Coulibaly's 26-year-old girlfriend, Hayat Boumeddiene, who is accused of being an accomplice in the killing of the policewoman, is still being sought by police.