Jacob Blake was shot seven times in the back point blank over the weekend by a white police officer in Kenosha, Wisconsin and has no movement from the waist down 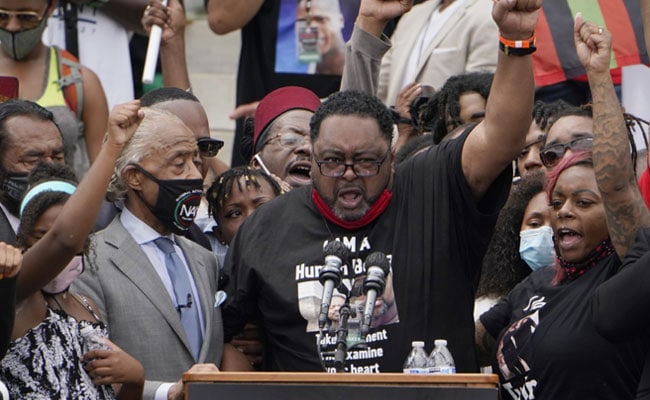 Police have removed handcuffs shackling Jacob Blake, who is paralyzed after US police shot him repeatedly in the back, to his hospital bed and stopped monitoring him, Blake's lawyer said Friday.

African-American Blake, 29, was shot seven times in the back point blank over the weekend by a white police officer in Kenosha, Wisconsin and has no movement from the waist down.

Word that Blake was tied to his hospital bed in Wisconsin -- his father said one ankle was shackled -- had caused a further uproar amid a groundswell of national anger over yet another shooting of a black man by police.

Blake's attorney Patrick Cafferty said Blake was restrained in his hospital bed and officers were watching over him because of an outstanding warrant stemming from a domestic violence-related incident in July.

Cafferty said he had arranged Friday morning with a district attorney to have that warrant cancelled.

"As of five minutes ago, the cuffs have been removed from Mr Blake and the deputies have left his room," Cafferty said Friday at midday, according to the Wisconsin State Journal newspaper.

Blake's father, Jacob Blake Sr, earlier expressed outrage after seeing his son restrained during a visit to the hospital on Wednesday.

"Why do they have that cold steel on my son's ankle?" Blake Sr said in an interview on CNN.

"This is an insult to injury," said the younger Blake's uncle, Justin Blake. "He is paralyzed and can't walk and they have him cuffed to the bed. Why?"

Blake Sr said his son told him he can feel pain in his legs but is not sure if the pain is actually coming from his legs.

Earlier, Wisconsin governor Tony Evers said he was baffled as to why Blake was tied to his bed.

"I would have no personal understanding why that would be necessary," Evers told reporters Thursday.