Read inOther Languages
This Article is From Jun 03, 2019

At least four tourists sustained minor injuries when a cruise ship crashed into a wharf in Venice. 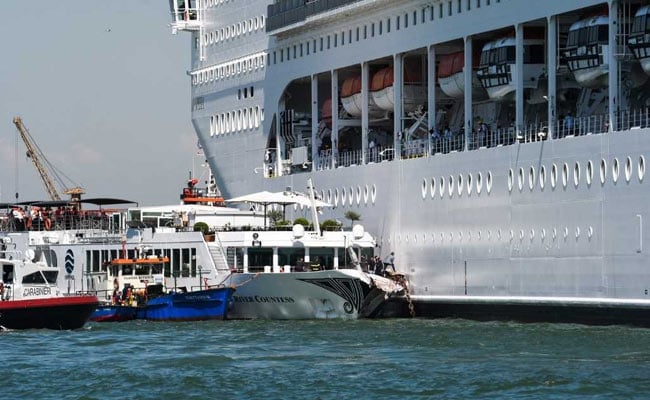 As the boat's massive bow began to move toward people on the dock, many ran screaming.

A 65,000-ton cruise ship blared an urgent horn as it beelined toward a busy Venetian dock, sending panicked onlookers running for safety.

Video showed the moment the 2,100-passenger MSC Opera bumped a nearby river boat early Sunday morning before slamming into the wharf in the San Basilio Terminal on the Giudecca Canal. A deep thud, then the sound of shattering glass could be heard as the vessel scrapped along the quay, and passersby shouted instructions to flee the rogue cruise ship.

MSC Cruises said in a statement to The Washington Post that the ship experienced "a technical issue" as it moved toward the dock for mooring.

The cruise company would not elaborate on the possible cause of the collision.

"The investigations to understand the exact causes of the events are currently in progress," the statement read. "Regarding these, the company is working closely with the local maritime and other authorities.

"The ship has in the meantime received authorization to move to be moored at the Marittima terminal, as planned," the statement continued. "She is now moored there and has begun passenger operations."

As the boat's massive bow began to move toward people on the dock, witnesses said many people ran screaming, according to AFP.

One man said he wasn't sure what to do but recalled that he "got away quickly, jumping to get on shore," he said, according to the news agency.

MSC Opera experienced technical problems in 2011, when the ship lost power in the Baltic, leaving hundreds of passengers without light and working toilets, BBC News reported at the time. The passengers were flown home, according to BBC News.