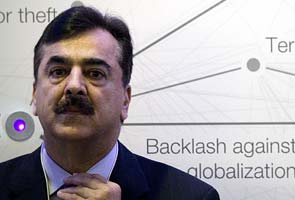 Islamabad: Pakistan's Anti-Narcotics Force (ANF) has named Prime Minister Yousuf Raza Gilani's son as an accused in a case of alleged irregularities in the import of controlled drugs, prompting the premier to say that he was being punished for backing President Asif Ali Zardari before the judiciary.

The ANF formally named Mr Gilani's son Ali Musa as one of the eight accused in a case related to alleged irregularities in the import of a large amount of the chemical Ephedrine, commonly known as the "poor man's cocaine".

The Supreme Court is examining allegations about out-of-turn quotas for importing Ephedrine that were granted to two pharmaceutical companies by the Health Ministry, allegedly under the influence of Ali Musa.

The premier's son was recently elected to parliament and is currently abroad on his honeymoon.

Speaking at an official function shortly after the ANF named his son as an accused on Friday, Mr Gilani said he was being "punished for standing by the President".

He accused ANF's Regional Director Brigadier Fahim Ahmad Khan, an army officer, of exceeding his powers and violating the rules of the government.

"The list of people who met the Prime Minister for four years was sought (from me). I said you should remain within your limits. Do not do something that has not been done before," Mr Gilani said.

Noting that the ANF Regional Director was on secondment to a civilian institution from the army, Mr Gilani said he was not following the "rules and law of procedure".

He said he would stand by Mr Zardari through "thick and thin" and would not leave the President in the lurch at any cost.

Mr Gilani said his son was being charged in a "baseless case" and that he was saddened by the fact that he himself was being made to face the courts even after being elected the country's premier.

Mr Gilani's remarks about being punished for standing by the President were an apparent reference to his refusal to act on the Supreme Court's orders to approach Swiss authorities to revive cases of alleged money laundering against Mr Zardari.

The top court has initiated contempt proceedings against Mr Gilani for failing to act on its directives.

The premier had earlier said he would rather be jailed for contempt than write to the Swiss government to reopen the cases against Mr Zardari, who is also the head of the ruling Pakistan People's Party.

Promoted
Listen to the latest songs, only on JioSaavn.com
Earlier this week, Mr Gilani directed his son to cut short his trip to South Africa and return to Pakistan to face the charges of his alleged involvement in the scam.