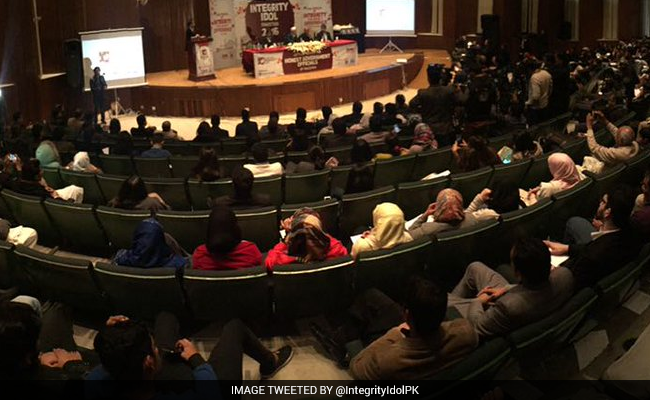 "Integrity Idol" aims to highlight some of the nation's honest bureaucrats.

Islamabad: Pakistan routinely ranks among the world's most corrupt countries, but reality TV show "Integrity Idol" aims to tackle the scourge by highlighting some of the nation's honest bureaucrats.

A Punjab province official who cracked down on bribery in his district linked to land registration came out tops in the show's finale on Wednesday.

Members of the public initially nominated some 300 government employees who were subsequently whittled down to five by a panel of official law enforcement experts who performed background checks.

"I told all of the inhabitants of the area that if any land registration official asks for even one rupee you call me or send a message," winner Rai Manzoor Husain Nasir, told AFP.

Nasir, who sacked 30 corrupt officials, gained almost 7,000 of the more than 20,000 votes cast online and by text to take the title of "Integrity Idol" at Wednesday's award ceremony, which was attended by leading politicians.

He also won praise for not using government perks, such as his petrol allowance, on non-official travel.

Nasir's back-story, as well as those of the other four finalists, was broadcast nationally in mini-documentary form on the popular Geo News network.

Others included Fida Hussain, a lab assistant from a government school in northwest Mardan city who is revered as a student mentor, and Farrukh Attique, who brought in new transparency measures in the district he serves in southwestern Balochistan.

Blair Glencorse, head of the US-based non-profit Accountability Lab -- which organised "Integrity Idol" -- said the organisation hoped to replicate its success in Nepal, where the first winner had gone on to become something of a celebrity and key advisor to the government on graft.

"It's about changing mindsets, celebrating integrity and really helping people push for the change that they want to see," he said.

There is however a long way to go.

Bribery and other forms of graft are endemic in Pakistan, with the country coming in 116th place out of 176 countries ordered from least to most corrupt by Transparency International on Wednesday.

The performance is a slight improvement on last year, when it ranked 117.

Meher Un Nisa Soomro, a communications official from Sindh province and another finalist, said it was important to change perceptions about public servants.

Promoted
Listen to the latest songs, only on JioSaavn.com
"Mostly there is a negative image of the government sector -- they are relaxing and they're not working," she said.

(This story has not been edited by NDTV staff and is auto-generated from a syndicated feed.)
Comments
Integrity IdolHunt For Honest BureaucratsRai ManzoorHusain Nasir