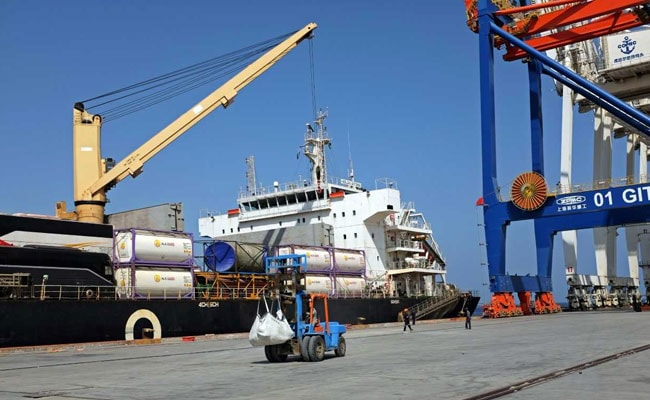 Pakistan's Gwadar Port, a key part of the China-Pakistan Economic Corridor, has officially opened for commercial shipping and is expecting its first vessel this month.

Also on the agenda was the issue of IT connectivity for the Port, and it was announced that Pakistan Telecommunications Company Ltd (PCTL), the national telecom company, will replace the current radio software with fibre-optic connectivity to increase efficiency.

The sub-Committee also concluded that the main competitors to Gwadar would be the major transhipment hubs of Dubai and Singapore. Consequently, it has dispelled with demurrage charges and offered favourable warehouse storage deals to attract business.

Work on the various projects in Gwadar is continuing at a fast pace to develop the port city to international standards, and four Chinese companies working there would be given exemptions from taxes, the Pakistan government had announced ahead of PM Imran Khan's China visit.

Granting of tax concessions and setting up the China-Pakistan Economic Corridor Authority, were done ahead of Imran Khan's Beijing visit in order to allay concerns of the Chinese leadership about CPEC slowdown.

In February 2013, China Overseas Port Holding Company Ltd (COPHCL) took over operations of the port from a Singaporean company. The concession agreement included a tax holiday for both the operators of Gwadar Port and the businesses being set up there.

The cabinet also approved sales tax and federal excise duty exemptions on the import of machinery, equipment, and material either for use in Gwadar Free Zone or for export, subject to the condition that all such imports were made by investors of the free zone.

It approved tax exemptions for the businesses to be established in the Gwadar Free Zone area for a period of 23 years with effect from July 2016 on their packaging, distribution, stuffing and de-stuffing, CFS, container yard, warehousing including cool and cold rooms, transhipments, labelling, light-end assembly, re-assembly, imports, exports and their value addition, and all related commercial activities.

The government has not been able to ensure the tax incentives that had been promised to the investors under the SEZ Act 2012.

The Bin Qasim Industrial Park (BQIP) and Korangi Creek Industrial Park (KCIP) have been set up under the 2012 law. Over 40 companies comprising domestic and foreign investors have made an investment of around Rs 70 billion in these two zones.

A joint forum of the civilian and military leadership, the National Development Council was given the approval to set up the CPEC Authority and give tax concessions to Gwadar port.

Back in 2016, the idea to establish the CPEC Authority was floated, but then PM Nawaz Sharif disapproved of it.

CPEC Authority will try to attract more Chinese financing in CPEC projects. One of the most important elements would be the establishment of a $9 billion Main Line-I project which has been delayed and has faced constraints.

Minister for Maritime Affairs Ali Haider Zaidi also said the Pak-China Friendship Hospital will be constructed at a cost of $100 million to provide state of the art medical facilities to people.

The hospital is planned on 68 acres of land and one out of six medical blocks and almost 20 percent of the residential blocks are completed.

The Minister said a 300 MW coal-powered plant is also being set up in Gwadar. A plant to treat hard water for human consumption is also being established. It will process 500,000 gallons of water.

Ali Haider Zaidi  said work on Gwadar airport is underway and it will be an international airport with world-class facilities for passengers and cargo handling.

COPHCL Chairman Zhang Baozhong said that billions of dollars of investments will be made in Gwadar that will provide a large number of jobs to the local people. He said Gwadar will become Pakistan's new economic hub.

He appreciated the Pakistan government, Pakistan Army and other institutions in providing maximum facilitation to Chinese companies working on various projects in Gwadar.