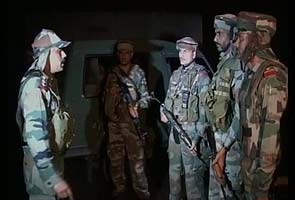 File photo of Indian Army personnel in Jammu and Kashmir

Jammu: The Pakistani Army today violated the ceasefire twice by firing mortar shells at Indian posts in two sub-sectors of Jammu and Kashmir's Poonch district along the Line of Control, drawing retaliation from Indian forces.

"The firing on several forward posts in Hamirpur sub-sector of Poonch began at 9:30 pm yesterday," he said, adding, "They fired automatic weapons and medium mortar shells. Our troops retaliated effectively and exchanges continued till 2230 hours."

There was no loss of life or injury, however.

The Pakistani troops also fired on Indian posts along the LoC in Mendhar sub-sector in Poonch district around 10.30 pm and it continued till 11.00 pm, Colonel Palta said.

A senior security official told PTI, "The 2003 Indo-Pak ceasefire has become meaningless. There is daily firing these days as was witnessed before 2003."

The 225-kilometres long LoC in Poonch-Rajouri sector has witnessed daily firing since August 10 with over 28 ceasefire violations recorded this month.

Promoted
Listen to the latest songs, only on JioSaavn.com
There have been over 80 ceasefire violations by Pakistani troops this year from January 1 till now.

Pakistan today passed a resolution slamming India for 'unprovoked firing' at the LoC. In the resolution, India was asked to hold dialogue and the firing was strongly condemned.