Imran Khan Paying Price For Being "Disobedient" To US: Russia

Imran Khan met Russian President Vladimir Putin in the Kremlin on February 24, the day the Russian leader had ordered a "special military operation" against Ukraine. 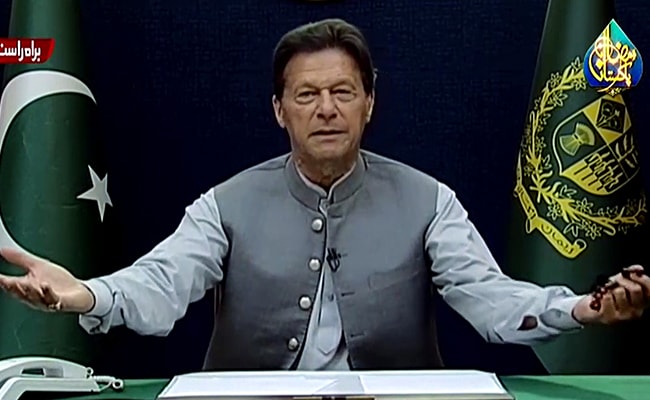 Russia has criticised the US for making "another attempt of shameless interference” into the internal affairs of Pakistan and asserted that Prime Minister Imran Khan was paying the price for being “disobedient” to Washington and being punished for visiting Russia in February this year.

Khan met Russian President Vladimir Putin in the Kremlin on February 24, the day the Russian leader had ordered a “special military operation” against Ukraine.

In doing so, he had also become the first Pakistani premier to visit Russia in 23 years after former premier Nawaz Sharif travelled to Moscow in 1999.

On Monday, Russia's Foreign Ministry spokeswoman Maria Zakharova said despite pressure from the US to cancel his visit to Moscow, Khan went ahead with his trip.

“Immediately after the announcement of the working visit of Imran Khan to Moscow on February 23-24 this year, the Americans and their Western associates began to exert rude pressure on the Prime Minister, demanding an ultimatum to cancel the trip," Zakharova said in a commentary on the controversy over Khan's allegation that the US was trying to effect a regime change in Islamabad.

“This is another attempt of shameless interference by the US in the internal affairs of an independent state for its own selfish purposes. The above facts eloquently testify to this,” Zakharova said.

The US-led West has imposed a series of crippling sanctions on Russia since it invaded Ukraine and has been pressing other nations to reduce their dependence on Russian oil and other products.

The senior Russian diplomat said that the sequence of events left no doubt that Washington had “decided to punish a disobedient Imran Khan,” which also explained why a number of members from Khan's ruling coalition decided to switch sides and shift their allegiances ahead of the April 3 no-trust vote.

Khan, 69, stunned the Opposition on Sunday by recommending snap elections within three months, minutes after a no-confidence motion against him was dismissed by the deputy speaker of the National Assembly.

Khan then got Pakistan President Arif Alvi to dissolve the 342-member National Assembly.

Pakistan's Supreme Court on Monday adjourned the hearing on the deputy speaker's decision to reject the no-confidence motion against the premier, who had lost majority in the lower house of Parliament.

Khan had named senior US diplomat Donald Lu as the person who was allegedly involved in the “foreign conspiracy” to oust his government through a no-confidence vote tabled by the Opposition.

Pakistan's Opposition leaders have ridiculed Khan's allegation, and the US has dismissed these claims.

Zakharova said Moscow was keenly watching the events unfolding in Islamabad over the last three days as well as the events preceding it.

In her commentary, she exuded hope that the Pakistani voters would be well-informed about these circumstances when they come to vote in the elections that are scheduled to be held 90 days after the dissolution of the National Assembly.