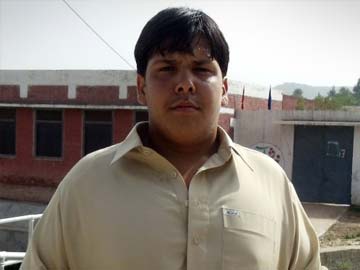 This undated family handout photograph released on January 10, 2014, shows Pakistani student Aitzaz Hassan, who was killed in a suicide attack outside his school in Hangu district

Islamabad: A Pakistani teenager, who sacrificed his life to stop a suicide bomber, saving the lives of hundreds of students, has been honoured with the country's highest award for bravery.

Aitzaz Hassan, 15, a student in Hangu district in Khyber Pakhtunkhwa province, has become a national hero after tackling the bomber who came to attack his school on Monday, with hundreds of students inside.

Hassan died in hospital after the bomber blew himself up at the school gates. No one else was wounded or killed in the incident.

The office of Pakistani Prime Minister Nawaz Sharif said it had advised President Mamnoon Hussain "to approve the conferment of Sitara-e-Shujjat (star of bravery) to Shaheed (martyred) Aitzaz Hassan.

"Shaheed (martyred) Aitzaz's brave act saved the lives of hundreds of students and established a sterling example of gallantry and patriotism," it said in a statement issued late Friday.

News of Hassan's act led to an outpouring of tributes on social media.

Pakistani newspapers, TV channels and social media sites had demanded recognition of Hassan's bravery, calling him a hero and calling for him to receive the nation's highest award.

Pakistan private TV channel "express NEWS" on Saturday broadcast footage from his village Ibrahimzai, in Hangu district in the troubled Khyber Pakhtunkhwa province, showing groups of people laying floral wreaths on his grave and hailing him as a hero.

Pakistan army soldiers were shown presenting the guard of honour at the grave, while hundreds of students were seen praying for Hassan in the morning school assembly.

"We are proud of him, he saved our lives, we will remember him for ever," a student wearing traditional grey school uniform told the TV channel.

Pakistani schoolgirl Malala Yousafzai, who survived being shot in the head by the Taliban for championing girls' right to education, paid tribute to the teenager on Friday describing him as "brave and courageous".

"In sacrificing his own life, Aitzaz protected hundreds of innocent young students from being killed," she said in a statement.

"I wish that in giving his own life he helps to bring peace to my people and my country," she said.

Malala, who was last year nominated for the Nobel Peace Prize, has also called for the government to award Hassan its "highest national award".

"His bravery must never be forgotten," she said.

Hassan's father Mujahid Ali Bangash, 55, told AFP on Thursday he felt not sadness but pride at his son's death.

"Aitzaz has made us proud by valiantly intercepting the bomber and saving the lives of hundreds of his fellow students," he said.

"I am happy that my son has become a martyr by sacrificing his life for a noble cause."

Promoted
Listen to the latest songs, only on JioSaavn.com
Bangash works in the UAE and was only able to reach Ibrahimzai village, which lies in an area of Hangu dominated by minority Shiite Muslims, the day after his son's funeral.

Police official Shakirullah Bangash told AFP on Thursday that Aitzaz intercepted the bomber 150 metres (490 feet) away from the main gate of the school, which has around 1,000 students.