Painting Exchanged For Cheese Sandwich Sold At Auction For $270,000

A Canadian Painting by folk artist Maud Lewis has been sold at an auction for $270,000 after coming to its owner in exchange for a grilled cheese sandwich. 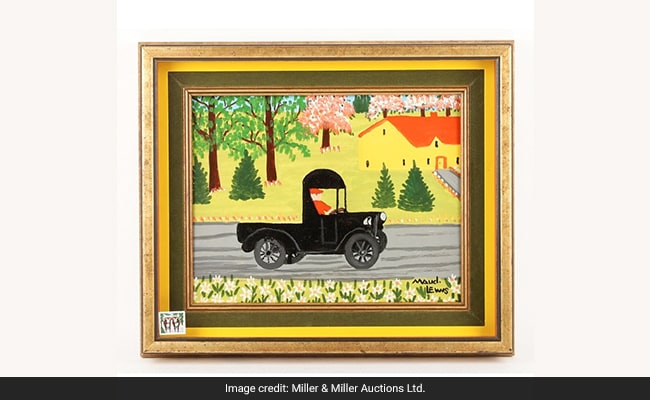 A Canadian Painting by folk artist Maud Lewis has been sold at an auction for $270,000 after coming to its owner in exchange for a grilled cheese sandwich. The painting titled “Black Truck” by Lewis has sold for 10 times its value, displaying a trend which has seen the Canadian artist's work surge in popularity.

The owner of the painting, Irene Demas, worked as a young chef in a restaurant which she owned along with her husband, according to The Guardian. Both of them had an agreement with another artist John Kinnear who would pay for his meals with paintings done by him and sometimes even his friends. One day, when Mr Kinnear came to the diner to eat in 1973, he brought with him paintings by Maude Lewis who was a close friend of his. The couple picked the now iconic "Black Truck" painting in exchange for a grilled cheese sandwich for Mr Kinnear, The Guardian report further said.

Speaking to The Guardian, Irene Demas talked about the grilled cheese sandwich saying, “Mind you, it wasn't just an ordinary grilled cheese. It was a great sandwich, with a five-year-old cheddar and beautiful bread.”

Maud Lewis mostly lived in poverty and used to sell her paintings on the road side in Nova Scotia, in Canada. Her signature style did not receive critical acclaim until decades after her death. She died in 1970, and rose to fame in the following decades even getting a movie based on her life in 2016 titled 'Maudie'. She also had written a series of letters to John Kinnear thanking him for his kindness and generosity in supplying her with paints. The letters were also sold during the auction.