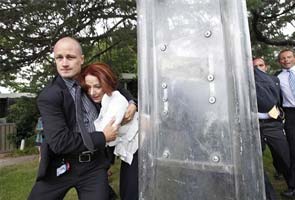 Sydney: Australian Prime Minister Julia Gillard on Thursday had to be bundled out of a Canberra restaurant by security service agents after it was surrounded by furious Aboriginal rights protesters.

Gillard and opposition leader Tony Abbott were stranded in The Lobby restaurant as dozens of demonstrators from a protest against Australia Day, which marks the arrival of British settlers in 1788, converged on the hotel.

The two leaders were dramatically escorted through the crowd by security agents and riot police brandishing shields, and the visibly rattled Gillard tripped and fell during the rush.

She later made light of the incident, saying she was "made of pretty tough stuff and the police did a great job."

Gillard had been presenting medals to emergency services workers when the protest erupted and said "the only thing that angers me is that it distracted from such a wonderful event."

The demonstrators had reportedly pounded the building's glass walls, shouting "shame" and "racist".

They had been attending so-called "Invasion Day" commemorations at the nearby Aboriginal tent embassy, a permanent camp of indigenous activists celebrating its 40th anniversary this year.

Michael Anderson, founder of the tent embassy, said the group had been angered by remarks Abbott made earlier in the day about the Aboriginal protest no longer being relevant.

"He said the Aboriginal embassy had to go, we heard it on a radio broadcast," Anderson told the Australian Associated Press news agency.

"We thought no way, so we circled around the building."

"What (Abbott) said amounts to inciting racial riots," he added.

Aborigines, whose cultures stretch back tens of thousands of years, are believed to have numbered around one million at the time of British settlement, but there are now just 470,000 out of a total population of 22 million.

Promoted
Listen to the latest songs, only on JioSaavn.com
They are Australia's most disadvantaged minority, with shorter life expectancy and much higher rates of imprisonment and disease than their non-Aboriginal counterparts.