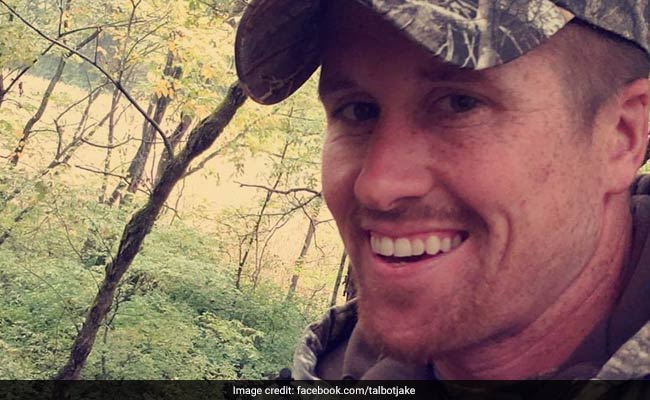 Jake Talbot uploaded the video to Facebook, making it visible to the public

A national climate in which politics feels intensely personal, combined with social media's power to disseminate, means that a disagreement between friends can quickly become a partisan conflagration in which strangers hundreds of miles away choose a side.

That's what's happened to Jake Talbot and gym owner Liz Drew, who disagreed over a Trump T-shirt in a Missouri fitness center and now find themselves at the center of an online debate. Their versions of events align neatly, but both came away with different impressions of the incident.

On Sunday, Talbot went to work out at CDY Fitness in Troy, Missouri, as he'd done regularly for eight years. As the veteran and National Guardsman had done a few times in the past, he wore a black shirt imprinted with the slogan "2016 Trump for President." It wouldn't have been the most unexpected sight in a state that went for Donald Trump in 2016 and voted to oust a Democratic senator, Claire McCaskill, in the latest midterm election.

But to some customers, the shirt stood out, and they found it disconcerting, according to Drew.

CDY Fitness' website describes it as "The gym where everybody knows your name," and Drew says she had considered Talbot a friend.

"He has come to the gym very regularly when he was in town, leaned across the counter of my front desk and talked to me about various problems that he's had," she said. It didn't seem like a big deal to talk to him about a shirt.

Drew said she took him aside and privately asked him not to wear the shirt again. "I said it could be construed as racist and several of my members had complained about feeling uncomfortable when he wore that," she recalled.

Talbot walked away from the conversation feeling that he had been unfairly attacked and took specific issue with the idea that his shirt could have racist connotations.

Driving home from the gym, he pulled out his smartphone and began to film himself explaining what had transpired.

"I just left CDY Fitness here in Troy, working out. When I was starting, the owner, Liz, came up to me and said that my Trump shirt that I had on was offensive, and that I'd need to remove it in order to work out there. And it's linked to racism," he said.

"Which, I freaking hate that word; whenever people use it it's thrown around way too loosely. It's 2019; get the hell over it. It's not racism," he said.

He then uploaded the video to Facebook, making it visible to the public. And what had once been a contained disagreement became a very public debacle.

More than 600 messages have since been posted beneath Talbot's video, with supporters of both viewpoints sparring in the thread. Some appeared to be from Missouri, while others came from around the country. Dana Loesch, the National Rifle Association spokeswoman, shared Talbot's story on Facebook. Conservative-leaning Twitter accounts decried Drew's decision.

"It's a free country; that's what I fight for. I love this country. I'm very patriotic," he told KSDK, an NBC affiliate in St. Louis.

"It's my commander in chief," he said of Trump. "He's doing a job; everyone needs to support him. I think he's doing a great job." (The Washington Post spoke with Talbot via Facebook, but he did not respond to requests to be interviewed.)

"You see it all the time. Everybody's always offended by something now," he told KMOV, a St. Louis CBS affiliate. "It doesn't bother me to wear the shirt. It's not going to affect me. It's just the racist part that she brought up, I just do not like it."

Legally, Drew was within her rights to ask him not to wear the shirt, attorney and constitutional law expert Floyd Abrams said.

"If the gym is privately owned, the proprietor may impose whatever limits on dress he or she wishes so long as it does not violate state or federal law such as those barring racial or religious discrimination . . . however anti-social and regressive those limits may be," he said.

The First Amendment limits the government's ability to infringe on speech, Abrams explained. But it has not been held to apply generally to all the people, as opposed to the government. Therefore, it would not protect a person who wants to wear a shirt supporting or denouncing the president from being excluded from a private business.

Drew maintains that it was a desire to keep her gym "a politics-free zone," rather than anti-Trump sentiment, that informed her personal decision to confront Talbot. It was clear to her, however, that some at the gym took issue with the shirt's political message.

"I've got many members here that felt uncomfortable, with the political state of affairs, with the current atmosphere," she said. She maintains that she would have asked the same of patrons wearing a shirt supporting Democrats Hillary Clinton or Barack Obama.

But partisan tensions in the country have increased since the Obama era, according to a 2017 study by the Pew Research Center.

"The divisions between Republicans and Democrats on fundamental political values - on government, race, immigration, national security, environmental protection and other areas - reached record levels during Barack Obama's presidency. In Donald Trump's first year as president, these gaps have grown even larger," the study found.

"The magnitude of these differences dwarfs other divisions in society, along such lines as gender, race and ethnicity, religious observance or education," the report said.

In the midst of this national division, Drew's desire to keep her gym apolitical has put it at the center of a partisan dust-up. Drew said she has been dealing with the backlash and had tried to stay out of the spotlight. Then calls started pouring in to CDY's front desk. Profane anonymous callers declared Drew a "Nazi" and worse. She says she took the gym's Facebook page down, as it was being spammed with hateful messages. Trolls as far away as Arizona and Nevada left a handful of one-star reviews on the gym's Yelp page, claiming it had "condoms on the treadmills" and "no real leadership, just snowflake oxygen thieves."

"I'm tired of the split, the divide in the whole country," Talbot told KSDK. "We need to come together."

(Except for the headline, this story has not been edited by NDTV staff and is published from a syndicated feed.)
Comments
Trump TshirtJake Talbot