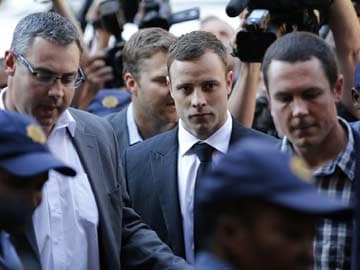 JOHANNESBURG: After his conviction on Friday for the negligent killing of his girlfriend Reeva Steenkamp on Valentine's Day last year, Olympic track star Oscar Pistorius's next battle will be to stay outside the walls of the notorious Pretoria Central Prison, or C-Max.

The prison, a forbidding brick and steel edifice with a reputation as the toughest in South Africa, is just a stone's throw from the High Court where Pistorius's six-month trial ended with not guilty verdicts on murder charges that carried certain jail terms.( Pistorius Guilty of Culpable Homicide in Killing of Girlfriend)

His conviction for culpable homicide attracts a maximum 15-year sentence but there is no minimum, and his defence team will argue that a man with no previous convictions should not end up in C-Max, where dozens of political dissidents were detained and executed by the white-minority regime that ran South Africa until 1994.

South Africa abolished the death penalty shortly after Nelson Mandela became its first black president, and the gallows and its execution wing - dubbed "The Pot" - are now a museum to the atrocities of apartheid.

But the prison's reputation remains undimmed as the worst place in the land - the permanent, overcrowded home of armed robbers, rapists and murderers, plagued by gang violence and mental and physical abuse.

"When you arrive, the big gangs make their move on you. They have knives and razor blades. Some even carry guns," said Serge Christiano, an Angolan who spent time in C-Max during seven years awaiting trial for attempted murder and armed robbery.

"When new people come in, guys will offer them a cup of tea with a sleeping tablet in it. When they pass out, they get raped," added Christiano, who was eventually released without charge.

"C-Max is the worst," said Farouk Meyer, a South African released in February after serving 15 years - five of them in C-Max - for a double-murder he says to this day was self-defence.

SEVENTY TO A CELL
For 23 hours a day, prisoners are kept 70 or more to a cell designed for 35, with those unable to get a bed sleeping on the floor. Whenever they leave the cell, even for a shower or to receive a visit, they are cuffed by the wrists and ankles.

Fittingly for the 'new' South Africa, nobody gets special treatment - which would be a daunting prospect for the 27-year-old Pistorius, whose life before Steenkamp's shooting has been revealed as a decadent world of fast cars, ritzy parties and glamorous women populated almost exclusively by whites.

"A lot of guys lose it. Either you lose it or you become stronger," added Meyer, who said he kept his head straight by studying law in an attempt to get his conviction overturned.
The Department for Correctional Services declined to comment.

If C-Max represents the toughest of the tough, other prisons in Africa's most advanced economy are far from soft.

Last year, the government stepped in and took over the running of the 3,000-inmate Mangaung maximum security prison from the British security firm G4S after reports of warders torturing prisoners with electric shocks - something the firm denied.

According to the International Centre for Prison Studies, a branch of Britain's University of Essex, South Africa's prison overcrowding is average by international standards at 128 percent - higher than in France, but lower than Greece.

But an inspection report submitted to parliament last year deplored the level of prison violence and said organised gangs and overcrowding were both substantially to blame.

Speculation has swirled about whether Pistorius's status as a double amputee would allow him to secure privileged treatment, separate from the majority of 'ordinary' prisoners.

NO SPECIAL TREATMENT
However, having spent much of his professional life fighting to compete as an able-bodied athlete, as he did in the 2012 London Olympics, where he reached the semi-final of the men's 400 metres, it would be quite a reversal to argue for special treatment if he were to find himself behind bars.

The Department for Correctional Services did not answer questions about disabled prisoner policies, but Therina Wentzel, head of the National Council for Persons with Physical Disabilities of South Africa, said things had improved dramatically since the 1980s, when a prison term for a disabled person could amount to a death sentence.

She said that while the basic philosophy was to treat all prisoners the same wherever possible, authorities had a large amount of discretion: "It really depends on the circumstances, on the individual."

After a high-profile trial, the African National Congress government would be keen to avoid any suggestion that Pistorius might receive rich man's - let alone white man's - treatment.
This is especially true after public anger this year at the release on parole of the 'Waterkloof Four', four young white men from Pretoria who were sentenced in 2005 to 12 years in jail for murdering a homeless man.

Shortly after they walked free, dressed in designer clothes and waving cheerily to reporters, cellphone video emerged of two of the group enjoying a pre-release party, complete with expensive whisky, in their cells.

Promoted
Listen to the latest songs, only on JioSaavn.com
The pair were promptly re-arrested, and the prisons minister at the time, Sibusiso Ndebele, said the authorities would not tolerate "anarchy" behind bars, rejecting the widespread belief that wealthy whites in particular can still buy a cushy ride.