One suspect in UK terror attack out of hospital 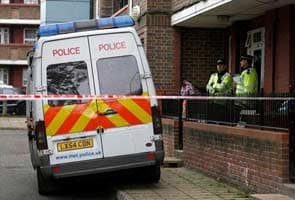 London: One of two suspects shot by police following the slaying of a British soldier in London last week has been released from the hospital and taken to a police station for questioning, police said on Tuesday.

The release came as new details emerged about links between the other main suspect and a radical Islamic cleric in Kenya who had been sanctioned by the United States for being part of a terrorist network.

The case centers on the brazen killing of off-duty soldier Lee Rigby, 25, who was slain by two men wielding knives and meat cleavers near his barracks in southeast London's Woolwich area.

The two suspects were shot by police and arrested on suspicion of murder. Video showed two men rushing a police car that arrived on the scene about 15 minutes after the killing of the soldier.

The younger suspect, 22-year-old Michael Adebowale, was judged well enough to be released from hospital and taken into police custody, where he was arrested on suspicion of the attempted murder of a police officer.

The other suspect, Michael Adebolajo, 28, remains in a hospital in stable condition under armed guard. He was seen on a separate video boasting about the killing minutes after the attack.

His family on Tuesday released a statement of condolence to Rigby's family that expressed horror and distress over the killing.

"Nothing we say can undo the events of last week," the statement read. "However, as a family, we wish to share with others our horror at the senseless killing of Lee Rigby and express our profound shame and distress that this has brought on our family."

Police have arrested 10 suspects - including the two shot at the scene - in connection with last Wednesday's killing.

In Kenya, police said they believed Adebolajo had earlier associated with a radical Kenyan Muslim cleric who tried to help him join an al-Qaida-linked rebel group in neighboring Somalia.

Muslim cleric Aboud Rogo Mohammed, who has since been killed, helped British citizen Adebolajo in his attempt to travel to Somalia to wage jihad, or holy war, against the country's United Nations-backed government, a senior Kenyan police official said Tuesday.

Adebolajo associated with Mohammed, who was suspected of steering young men to join Somalia's extremist rebels, the Kenyan police official said. The official insisted on anonymity because he is not authorized to speak to the press on this matter.

Adebolajo was arrested with five other young men in November 2010 near the Kenya-Somalia border and eventually returned to Britain, police said.

The radical Muslim preacher was shot dead in Mombasa, Kenya, in September 2012. Mohammed's supporters blamed the police for his killing and staged riots in which three security officials died in grenade attacks.

A UN report also named Mohammed as steering young men to al-Shabab and described Mohamed as an extremist who advocated the violent overthrow of the Kenyan state.

Pate Island, part of the Lamu Archipelago at the Kenya coast, where Adebolajo was arrested in 2010, was one of the most commonly used routes for  Islamic extremists trying to cross into Somalia to join al-Shabab, said the police official.

The al-Shabab camps have churned out dozens of bombers who have launched terrorist attacks in and outside Somalia. Al-Shabab controlled the Somali capital, Mogadishu, from roughly 2007 to 2011. The group still dominates most of south-central Somalia but has seen its territory reduced after military pushes by African Union and Somali forces.

The police official said Adebolajo was taken to a court in the port city of Mombasa, where police asked the court for time to investigate him on the allegations that he was attempting to fight with the militant group.

A video clip from a local TV station shows a man appearing to be Adebolajo speaking during a court hearing in Mombasa on Nov. 23, 2010. He says, "These people are mistreating us. We are innocent. Believe me," shortly before leaving the court with five other suspects.

The extensive revelations about Adebolajo's alleged attempts to link up with international terrorists have raised questions about whether Britain's intelligence services should have known he posed a risk.

Britain's parliamentary intelligence committee said Tuesday it will investigate whether U.K. intelligence services fell short before the killing of Rigby.

British officials say the two main suspects had been known to them for some time as part of previous investigations.

Rigby's slaying and the suggestion of suspects' links to radical Islam have fed a spike in anti-Muslim sentiment in Britain, with police and activists reporting a surge in hate crimes, violence and vandalism.

Michael Spurr, chief executive of the National Offender Management Service, said in a statement that the incident started Sunday afternoon when a prison officer was taken hostage by three prisoners at the Full Sutton prison in Yorkshire.

A second officer tried to aid the hostage and was injured, receiving cuts in her arm, Spurr said.

Promoted
Listen to the latest songs, only on JioSaavn.com
Spurr said the hostage "suffered a broken cheekbone and a number of wounds to his face at neck" at the beginning of the incident. Both officers received hospital treatment for their injuries.

Officials said the three prisoners involved are Muslim. Two are aged 25 and one is 26.