One student killed as Islamists and police clash in Egypt 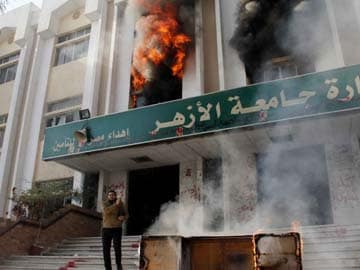 A man stands outside a faculty building at Cairo's Al-Azhar University after student supporters of the Muslim Brotherhood stormed it on December 28, 2013.

Cairo: A student was killed on Saturday and scores were arrested when supporters of the Muslim Brotherhood clashed with Egyptian police at the Cairo campus of Al-Azhar University, state media reported.

Shaimaa Mounir, a student activist, told Reuters the dead student was Khaled El-Haddad, a supporter of the Islamist movement which has continued daily protests after the government designated it a terrorist organisation this week.

Protesters threw rocks at police and set tyres on fire to counter the teargas. Al-Ahram quoted a health ministry official as saying that one student had been killed and five injured.

Police arrested 101 students for possession of makeshift weapons including petrol bombs, the state news agency reported. Calm had been restored, and scheduled exams went ahead after the morning clashes.

Al-Azhar, a respected centre of Sunni Islamic learning, has for months been the scene of protests against what the Brotherhood calls a "military coup" that deposed Islamist Mohamed Mursi as president in July after a year in office.

The Brotherhood condemned what it called a "violent crackdown on student protests", saying in a statement that the deployment of security forces on university campuses was an attempt by the government to "silence any voice of opposition."

Security sources confirmed the Brotherhood's statement that nine Al-Azhar students have been killed in clashes with police since the start of the academic year in September. On Friday, at least five people died in clashes across Egypt.

The Brotherhood's London press office said the buildings were set on fire by security forces, not the student protesters.

Separately, a prosecutor ordered the continued detention of seven Al-Azhar students arrested during clashes on Thursday.

The students are the first to be ordered detained by prosecutors on accusations of belonging to a terrorist group since the Brotherhood's formal listing on December 25.

That move increased the penalties for dissent against the government installed after the army ousted Mursi following mass protests against his rule.

The widening crackdown against the movement that was elected after the toppling of veteran leader Hosni Mubarak in 2011 has increased tension in a country suffering the worst internal strife of its modern history following Mursi's ousting.

The army-backed government appears bent on clamping down on dissent ahead of a referendum next month on a new constitution, a step that will pave the way for parliamentary and presidential elections.

Thousands of Brotherhood members have been arrested. More than 250 Brotherhood supporters were arrested on Friday alone using the new classification.

Under the anti-terrorism law dating back to the presidency of Mubarak, those convicted can be jailed for life. Authorities said this week that the movement's leaders could face the death sentence.

Human Rights Watch said on Saturday that the government's designation of the Brotherhood as a terrorist group was "politically driven" and intended to end all of the movement's activities.

An adviser to interim president Adli Mansour said in comments published on Saturday that the decision was not political: "instead, is the use and application of existing laws."

Mustafa Hijazi also told London-based Asharq al-Awsat newspaper that he believed Egypt would not return to a state of emergency even if the violence continued.

Authorities lifted the state of emergency in November, three months after the army enforced the measures amid the bloody turmoil that followed its overthrow of Mursi.

Analysts say the government's latest move against the Brotherhood points to the influence wielded by hawks in security services. Some officials, including Interior Minister Mohamed Ibrahim, were appointed by Mursi but sided with the army and have been key players in the security crackdown since the Islamist president's ouster.

A conservative estimate puts the overall death toll since Mursi's fall at well over 1,500.

Promoted
Listen to the latest songs, only on JioSaavn.com
Authorities accused the Brotherhood of carrying out a suicide attack on a police station that killed 16 people on Tuesday, though it was claimed by an al Qaeda-linked group based in the Sinai Peninsula.